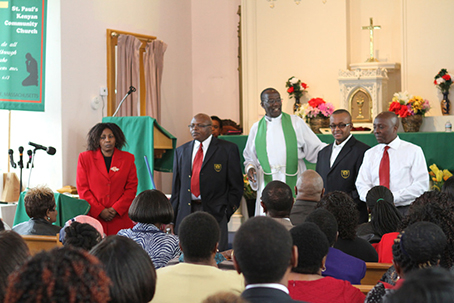 By Sam Mwaura/Samrack Media
The guest Speaker of the day was Mrs Monica Kagume from Kenya.Mrs Kagume preached powerfully using Banana illustrations and connected well with the congregants when she bodly mentioned the many personal trials she has gone through and overcome in life.The congregation listened attentively how she had lost almost half of her weight,change of skin color,was as dark as charcoal,crippled and left for dead by a sudden illness but she fought well and never gave up in her spirit.Many had given her days to die but a powerful intercessor friend of hers told her she had a message from God concerning her,that she will not die but live, and will proclaim what the LORD has done.

God sustained her.She narrated how she went to India for a Kidney transplant and now thanks be to God she is as fit as a fiddle.God has continued to marvel her and open for her opportunities to travel the whole World and proclaim the boldly the gospel of Jesus Christ.

Saint Paul’s Kenyan Community Church,Lawrence was established in 1995, was the first Kenyan Church in New England. Rev.Ven.Peter Gachathi Vicar Incharge and incumbent (Kenyan American Pastors Fellowship President )was the founder in collaboration with 7 other members.It was housed in Malden under space rental arrangements until 2007 when the congregation bought a former Polish Catholic Church located at 112 Andover Street in Lawrence. The price tag was $485,000.00 A deposit of $186,000 was put down and therefore financing the remaining $299,000.00 Dedicated members of the Church were able to defray the debt to $97,500 in less than seven years. Between January and October 26, 2014 the Church’s congregation and invited guests were able to raise $65,000.00 and thus reduce the mortgage to a mere $32,500.00 Praise be to God.

The Church’s projection is that the remaining balance will be paid off by the end of summer 2015.The parishioners will forever be grateful to members of the Church, friends and well wishers for their continued support of the organization through the years.

St Pauls Church Development Chairman Mr.Karanja Kimani conveyed Special thanks to all who have been supportive throughout the years in this Church project and to God Be the Glory thus far the Lord has brought us. Ebenezer!!
SEE FUNDRAISING EVENT PHOTOS

Share thisFacebookTwitterPinterestEmailWhatsAppBy Sam Mwaura/Samrack Media The guest Speaker of the day was Mrs Monica Kagume from Kenya.Mrs Kagume preached powerfully using Banana illustrations and connected well with the congregants when she bodly mentioned the many personal trials she has gone through and overcome in life.The congregation listened attentively how she had lost almost half of