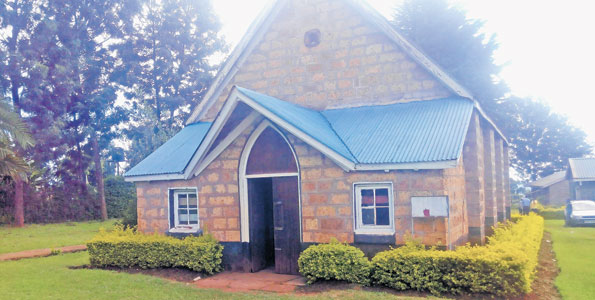 As the Church of Scotland Mission settled in Kikuyuland ministering to the African populace at the beginning of the 20th century, many European communities sprung up exploiting the rich farmlands available around Kiambu and Limuru.

Although they worshipped the same Christian God, it was deemed improper for Africans to worship in the same sanctuary as Europeans; therefore separate places of worship were built.

St. Cuthbert Church was founded in 1912, in Redhill, East of Limuru for the specific worship of Europeans.

The church was built on a piece of land measuring 3.44 acres which was donated to the Church of Scotland Mission by W.E. D. Knight, a farmer in the area.

The original structure was a simple corrugated iron sheets building but as the settler population expanded, a new more permanent sanctuary was built.

The new church, which is still standing today, was dedicated in 1921 by the Reverend Stevenson of the Church of Scotland Mission. The building is designed in a gothic style with dressed stone walls under a corrugated asbestos sheets roof lying on timber boards supported by timber trusses.

There are two large stained glass fixed windows lighting the altar area. The church has a seating capacity of about 200.

There is a well maintained graveyard at the rear of the building where a number of European settlers are buried dating back to 1927. In later years, after Kenya’s independence in 1963, African elders were also buried here.

The iron sheets structure was subsequently handed over to the Africans. Among the first Africans to worship there were Jackson Karanja Kiarie(Ng’ondu) who was a clerk to Mr Knight, Jonah Karugu who was a cook, Jonathan Maara and Ishmael Gatimbia who were caretakers at the church.

The first African ministers to preside at the church include the Reverend Joshua Matenjwa, the Reverend Stanley Kahahu and Jeremiah Gitau who would later become the Moderator of the Presbyterean Church of East Africa (PCEA) General Assembly.

The colonial administration continued to excise more lush land for European settlement around Limuru, pushing Africans off their land and relocating many of them to the near-barren Ndeiya area overlooking the eastern escarpment of the Rift Valley.

During the State of Emergency declared in 1952, both the iron sheets and the European-only churches were closed due to insecurity and Mr Knight left Kenya for Britain. Keys to both churches were left with African elders.

In the course of the Emergency, the iron sheets structure for Africans was demolished and the materials transferred to Mirithu in Ndeiya where a new church was established to serve the Africans who had been moved there.

In the meantime, the main church at Redhill remained closed under the care of African elders. It was not until 1963 that the church was reopened and Africans were allowed to worship there for the very first time.

A number of those Africans who had earlier been shifted to Ndeiya started returning to Limuru and literary had to buy back their own land from the settlers. It was this group and other Africans who had not been resettled who contributed to the growth of the church.

In 1965, members of the Anglican Church of Kenya (ACK) requested to fellowship together with the PCEA at St. Cuthbert, which request was granted. Later in 1969, the ACK would have a separate service early in the morning followed by the PCEA service.

This harmonious relationship continued up to 1982 when the ACK built their own church across the road.

The membership of the church continued to grow and it became clear that the existing structure was too small. The foundation stone for a new sanctuary was laid on April 16, 2000 by the Reverend Patrick Mwarangu Rukenya, then Secretary-General of the PCEA General Assembly.

At the time of my visit the old church was being used for children’s Sunday school and I must say it is in a rather sorry state.

Many of the pews are broken, the altar elements are missing, the floor and some of the walls are showing structural cracks and there is a general air of neglect. The building is in dire need of repair and restoration.

It has not been gazetted as a national monument by the National Museums of Kenya.

This is yet another priceless gem which tells the history of our country that has been allowed to go to waste. It tells of the suffering of our people and that resilient spirit in Kenyans to bounce back and reclaim our national glory.

We must preserve this legacy for the benefit of future generations.

The author is a retired banker and motorcycle enthusiast

St. Cuthbert Church in Limuru, Kiambu County. PHOTO |   St. Cuthbert Church: Another architectural gem going to waste That the pre-colonial building tells of the suffering of our people and their resilient spirit to bounce back should move all concerned to preserve its legacy. As the Church of Scotland Mission settled in Kikuyuland ministering