As a result of indiscriminate attacks, including shooting and shelling, shells landed in camps for displaced people inside United Nations bases, and in other densely populated areas in the city, killing and wounding civilians. Human Rights Watch researchers visiting Juba in July after the clashes documented multiple crimes, most committed by government soldiers from the Sudan People’s Liberation Army (SPLA).

“A year after South Sudan’s leaders signed a peace deal, civilians are dying, women are being raped, and millions of people are afraid to go home,” said Daniel Bekele, Africa director at Human Rights Watch. “On August 12, the UN decided to send more peacekeepers to Juba but put off a long-overdue arms embargo. The continued supply of arms only helps fuel the abuses on a larger scale.”

The UN and member countries should also impose targeted sanctions, including asset freezes and travel bans, on those responsible for serious human rights abuses, Human Rights Watch said. The African Union Commission and donors should proceed without delay with preparations for a hybrid court to investigate and try the most serious crimes committed since the start of South Sudan’s new war in December 2013 – including during the recent fighting. 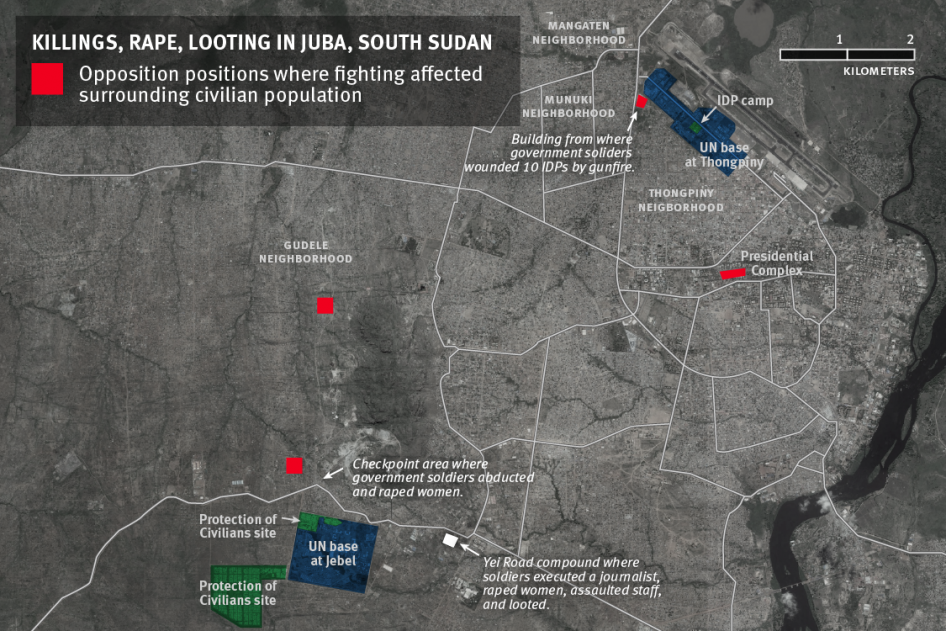 Under a peace agreement signed one year ago, on August 15, 2015, the two sides agreed to form a national unity government, integrate their forces, and establish the hybrid court, among other steps. Under the agreement, the African Union Commission was to set up the court, with South Sudanese and other African judges and staff. Key steps to create the court are to be completed by October 2016, but concrete progress has yet to occur.

On July 8, 2016 fighting started between forces loyal to President Salva Kiir, a Dinka, and those of his first vice-president, Riek Machar, a Nuer, during a cabinet meeting at the presidential compound. The violent gun battle was preceded by weeks of heightened tensions between the forces in the capital surrounding lingering delays in implementing the peace agreement.

Over a four-day period, the two sides battled in several locations around Juba. Human Rights Watch researchers in Juba heard accounts of soldiers firing indiscriminately, hitting densely populated areas or displaced people’s camps inside UN bases. At least a dozen civilians who had sought safety in the UN camps died and scores were wounded.

Researchers also documented targeted killings, rapes and gang rapes, beatings, looting, and harassment, often along ethnic lines, in several areas of Juba. The Thongpiny, Munuki, Mangaten, Gudele, and Jebel neighborhoods were particularly affected. Due to security restrictions to some affected areas, researchers could not establish the full scale of abuse. Soldiers, operating under the formal command of General Paul Malong and President Kiir committed most of the crimes.READ MORE