Kenya’s Jemima Jelagat Sumgong competes in the Women’s Marathon during the athletics event at the Rio 2016 Olympic Games at Sambodromo in Rio de Janeiro on August 14, 2016. / AFP

Kenyan Jemima Jelagat Sumgong evaded a protester who leapt onto the Rio marathon course on Sunday to become the first woman from her country to win Olympic marathon gold in two hours, 24 minutes and four seconds. 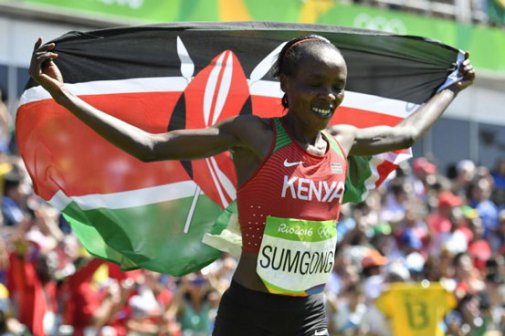 Kenya’s Jemima Jelagat Sumgong celebrates her victory in the Women’s Marathon during the athletics event at the Rio 2016 Olympic Games at Sambodromo in Rio de Janeiro on August 14, 2016. / AFP PHOTO

Bahrain’s Eunice Jepkirui Kirwa claimed silver in 2:24:13 and Ethiopian Mare Dibaba snatched the bronze in 2:24:30. Sumgong, 31, said the man on the course immediately brought to mind memories of the April London Marathon, when she experienced a similar incident. “It brings back memories of London, that’s where my thoughts went back to,” Sumgong said. “I was like scared, maybe I’m in trouble.” It was not immediately clear if the man, who went head over heels over a metal barrier, had been arrested or what his motive had been. At the Athens Olympics in 2004, defrocked Irish priest Neil Horan tackled Brazil’s Vanderlei de Lima near the finish, knocking him out of the lead. The bronze medallist lit the Olympic cauldron at Rio’s opening ceremony on Aug. 5.

Sumgong, 31, bided her time throughout the race, staying with the leading pack and not moving ahead until the end. “I had prepared that I would move out at kilometre 35 and my body was responding very well, as well as my movement,” Sumgong told reporters after crossing the line at Rio’s Sambadrome, the parade ground where brightly costumed samba schools perform during the city’s annual Carnival celebration. “At the 40 kilometre I knew the gold was mine.” See Also: Brazilian judge rules to allow protests at Olympics “It was very hot but everybody had to get through the heat. I had to control my body and listen to my body very carefully,” Sumgong said. Belarusian Volha Mazuronak, 27, shook up the pack halfway through, taking the lead and briefly pulling ahead of the lead group. The move pushed the pace, stringing out what had been a lead pack of more than two dozen runners, causing some to drop back. It was the first in a series of attacks by the first-time Olympian, who was ultimately unable to sustain the pace and was dropped by the leaders in the closing stages before finishing fifth in 2:24:48.
Read more at: http://www.standardmedia.co.ke