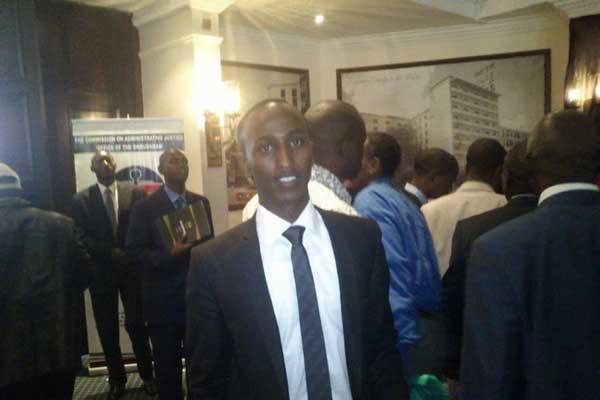 One of the four Al-Shabaab militants who stormed Garissa University College and killed 148 people has been identified as a promising Kenyan lawyer who graduated from a local public university.

Abdirahim Mohamed Abdullahi (above), who was gunned down by Kenyan security personnel alongside his three accomplices, was also the son of a chief in Mandera County.

His family reported to the authorities that he had gone missing and that they suspected he had gone to Somalia to join Al-Shabaab militants. Mandera County Commissioner Alex Nkoyo confirmed Abdullahi’s father had reported to police that his son had cut links with them.

He said he last spoke to his son last year by telephone but his son declined to divulge where he was calling from. The father first reported to the authorities that he suspected his son had joined the terror group when he was in his second year at the University of Nairobi (UoN).

The chief was in Nairobi yesterday to hold talks with his bosses. Abdullahi, who is said to have graduated from UoN with a law degree, was described by a person who knew him well as a “brilliant upcoming lawyer”.

He was a student at Wamy High School in Nairobi’s South C where he scored an A-minus in the Kenya Certificate of Secondary Education in 2007, according to Interior ministry spokesman Mwenda Njoka.

“It is very necessary and critical that parents whose children go missing or show tendencies of having been exposed to violent extremism report to authorities to help prevent further escalation of radicalisation,” Mr Njoka said.

A relative of the terrorist who spoke to The Standard via telephone from Mandera on condition of anonymity said Abdullahi went missing shortly after completing his law degree. The family, he said, reported his disappearance immediately at Mandera Police Station.

“We have a son who has been missing since 2013. We have reported his disappearance to the police. If it is true he is one among the killed terrorists, we wish worse should have happened to him. We pray that he pays for his callous sins in the afterlife,” the relative said.

“As a family, we are not bothered by his death. We are shocked by the number of innocent, promising human souls they have cut short in the most brutal way and the bad name they have given to the family. We mourn with the families who lost their loved ones at the hands of the terrorists.”

One of Abdullahi’s former schoolmates in Mandera said he was stunned by the reports that he was among those who massacred Garissa University students. “I knew him as an innocent boy who loved playing football in school.

I wonder how, with his promising future, he fell into the trap of bloodthirsty criminals,” he said. Abdullahi went to Mandera DEB for his primary school education. Other reports indicated that after graduating from UoN in 2013, he joined a local bank as a legal officer.

Abdullahi was identified when the Kenya Defence Forces paraded the four bodies of the terrorists in the streets of Garissa. Angry residents The other bodies are yet to be identified. See also: Attackers movement show they knew campus well, says guard Hundreds of people, including children, viewed the corpses that were atop a pick-up truck that drove down the main Garissa street. Some residents pelted the bodies with stones as the vehicle passed by while others jeered and shouted in anger. The bodies were rushed back to the hospital mortuary dangling from the speeding vehicle to avoid a stampede from the huge crowd.

Meanwhile, five suspects have been arrested in connection with last Thursday’s attack. The mastermind of the attack is said to be Mohamed Mohamud Gamadhere aka Dulyadeyn, a Kenyan now believed to be living in Somalia.

A Sh20 million bounty has been placed on the head of the terror mastermind.

One of the four Al-Shabaab militants who stormed Garissa University College and killed 148 people has been identified as a promising Kenyan lawyer who graduated from a local public university. Abdirahim Mohamed Abdullahi (above), who was gunned down by Kenyan security personnel alongside his three accomplices, was also the son of a chief in Mandera