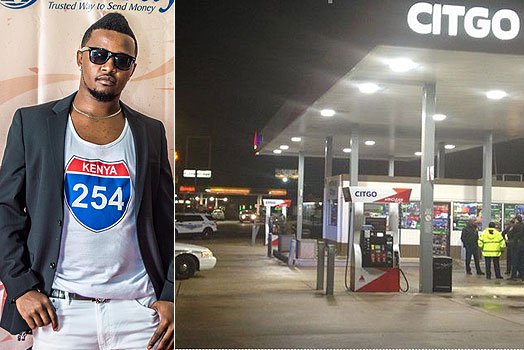 By BMJ MURIITHI
An Atlanta-based Kenyan man succumbed to injuries Sunday morning after he was shot by a gunman while working at a petrol station in Birmingham, Alabama, USA.Mike Mulwa, 29, died following an altercation on Saturday night at Citgo Company petrol station located on 9800 block of Parkway East in the City of Birmingham.A statement released by local police stated that officers from the East Precinct responded to an emergency call at around 11.30pm Saturday and found two people trying to resuscitate the victim.

“Mulwa was rushed to the University of Alabama trauma hospital where he underwent surgery but died from the gunshot wound at 4.30 a.m. on Sunday,” read part of the statement.

Investigators believe robbery was the motive.

By Sunday evening, detectives were still investigating the incident and asked anyone with any information on the shooting to call the police.

“Investigators are sure an altercation took place inside the location and at some point the victim was shot,’’ said Sgt. Bryan Shelton, the lead detective.

“People should be able to go to work and return home without being the victim of a crime. Our investigators will work hard to bring this family answers and bring the killer to justice,” added Shelton.

A family member told the Nation that Mulwa was the founder of #254 clothes label and the proprietor of #254 skillwear fashion brand.

The Kenyan community in Atlanta was shocked by the news of Mulwa’s death.

“His wife, who is expectant with their third child, is in disbelief and is totally saddened by the news,” said Chege Maina, a close family friend.

By Sunday evening, detectives were still piecing together evidence from the scene of crime, including reviewing footage from security cameras.

Mr Mulwa lived in Atlanta but worked in Alabama, according to family members.

Family members told a local TV station that he had called a friend to say he had been shot and asked that friend to call 911.

Mulwa’s parents, Violent Mueni, and Councillor Ngangi, live in Kenya, as well as his only surviving brother, Vincent Mutuku.

He moved to the US in 2008, and worked in various department stores in Atlanta before landing a job with Shaw Industries.

His family described him as soft-spoken and kind – a man of the people.

“His smile was contagious. He lit the room,” his cousin said.

“His demise is one that has sent waves through the Kenyan-American community.”

He leaves behind a wife, two children and an unborn baby.

Authorities are requesting anyone with information that could lead to the capture of the assailant to call Birmingham police at 205-254-7777 or Crime Stoppers at 205-254-7777.

Share thisFacebookTwitterPinterestEmailWhatsAppMike Mulwa, 29, was the founder of #254 clothes label. PHOTOS | COURTESY SHOCK AS 254 FASHION FOUNDER SHOT DEAD AT ALABAMA PETROL STATION – PHOTOS By BMJ MURIITHI An Atlanta-based Kenyan man succumbed to injuries Sunday morning after he was shot by a gunman while working at a petrol station in Birmingham, Alabama,