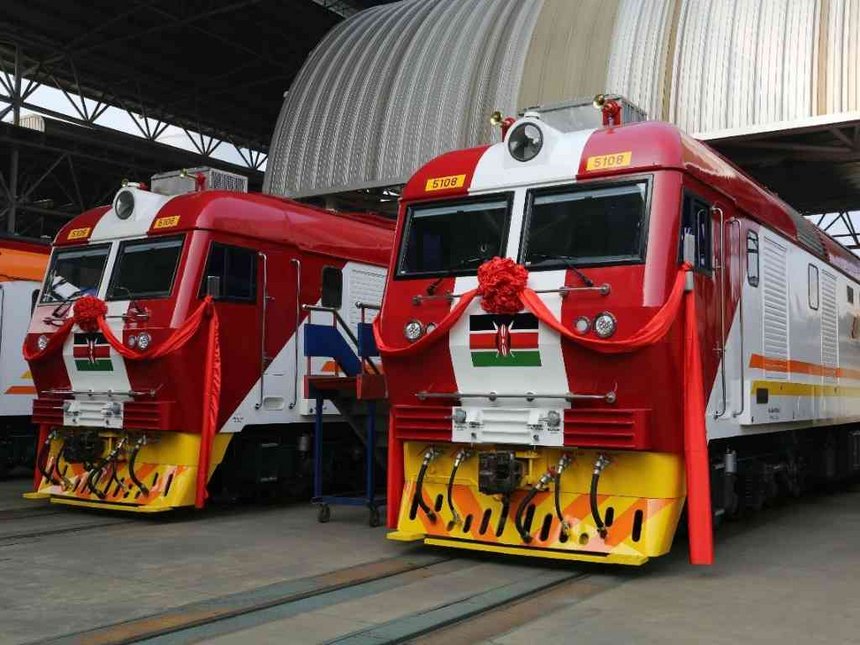 Some of the locomotives for operations of the Standard Gauge Railway that will be in the country by January 31.Photo Courtesy.

Six of the 56 diesel locomotives for operations of the Standard Gauge Railway will be in the country by January 31, Transport Cabinet Secretary James Macharia announced yesterday.

The SGR is set to start operations in June.

A shunter is part of a train from the main line to a siding, or from one track to another.

The locomotives were manufactured by CRRC Qishuyan, one of the major diesel locomotive makers in China.

“They (CRRC) have ensured that speedy manufacture of the locomotives is as per the quality prescribed,”

Macharia said in a statement. “We are confi dent that the operator will ensure that both the infrastructure and the equipment are maintained to the best global standards.”

The ministry said 43 of the 56 locomotives will be used for transporting cargo, fi ve for passengers, while another eight are for shunting operations.

Principal Secretary Irungu Nyakera said: “We trust that they will work with manufacturers of these equipment to achieve the desired quality

and efficiency levels. I invite manufacturers such as CRRC Qishuyan to set base in Kenya and manufacture for Africa and the rest of the World.”

He said SGR will also reduce accidents caused by heavy trucks on our roads, reduce transit times for goods, and improve the overall transport sector in Kenya.

“We further expect that in addition to us achieving all this, China Communications Construction Company and China Road and Bridge Corporation will put in all the necessary measures to preserve and protect the environment, and also give back to the community through Corporate Social Responsibility initiatives,” Maina said.

The construction of the first phase (Sh327 billion Mombasa-Nairobi line) is 98 per cent complete, the ministry said, with works for phase 2A expected to start in the first quarter of 2017.

The project has been criticised by conservationists who say the railway will destroy the Nairobi National Park.