Secrets of Raila US tour revealed 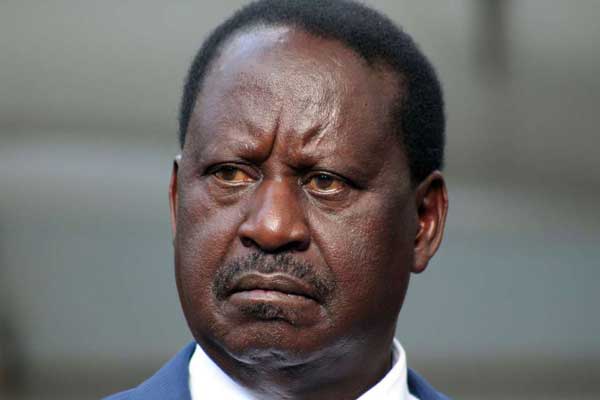 Secrets of Raila US tour revealed

National Super Alliance leader Raila Odinga returns to Kenya on Thursday from his week-long tour of the United States to unveil a new action plan believed to enjoy the backing of key American politicians and bureaucrats.

Nasa principal Moses Wetang’ula revealed in an interview with the Sunday Nation that Mr Odinga will unveil a two-pronged strategy to force the Jubilee Government into accepting reforms.

The opposition’s plans have gained momentum as four of the 19 county assemblies it controls have adopted motions for creation of what it calls the People’s Assembly.

Nasa leaders said the US trip was part of the plan by the coalition to crystallise its resistance and economic boycott plan that will be activated if the swearing-in of President Uhuru Kenyatta is sanctioned by the Supreme Court.

“Raila has met everybody he programmed to meet in the US, and he is continuing to meet more. When he comes back, we will release a programme, an action plan going forward,” Mr Wetang’ula said.

Mr Odinga is confident that his efforts to have more robust international pressure on President Kenyatta have been boosted by his visit to Washington DC to take the message “directly” to the international community after accusing some Nairobi-based Western envoys of bias.

Today, the Nasa team will hold a rally at Jacaranda Grounds in Nairobi to further push the opposition message before Mr Odinga jets back.

Mr Odinga, who successfully petitioned President Kenyatta’s August 8 win at the Supreme Court, withdrew from the October 26 presidential poll protesting lack of electoral reforms and what he said was a pre-determined result.

He has since asked his supporters to organise themselves under the People’s Assemblies, which he has said will marshal and endorse proposed changes to the Constitution, including on the structure of government and the electoral regime.

Specifically, Mr Odinga has demanded a six-month interim government to oversee a credible poll that he says is the only way to achieve peace in the country.

While a motion to adopt the People’s Assembly and reject Mr Kenyatta’s presidency is being debated in 19 of the 47 assemblies — with Siaya, Homa Bay, Busia and Vihiga having already adopted it — Mr Odinga’s US trip was the other half of the strategy.
On Saturday, former Kakamega senator and Ford Kenya deputy party leader Boni Khalwale revealed the existence of a special team to craft the strategy and Nasa’s next plan — with the US trip fitting right into it.

“Everything you are seeing is deliberately thought through and is supposed to achieve specific expectations. We have constituted a special team that has been tasked with strategy, research and communication,” said Dr Khalwale.

He went on: “We are walking a very thin line, we cannot afford to operate outside the Constitution. That is why our research team is constantly comparing strategies with the team for it to live within the law.”

In Washington, the former prime minister met, among others, Yamamoto Donald, the assistant secretary of State for African Affairs in the US administration, Michael Phelan, director of the Senate Foreign Relations Committee, and Greg Simpkins, director of the House of Representatives sub-committee on Africa.

He also met Senator Christopher Coons, one of the most influential voices in the Senate on Africa, and who chairs the House Foreign Relations sub-committee on African Affairs.

In the meetings, Mr Odinga explained Nasa’s resistance plan, and pushed for support for reforms. “It was a pleasure to meet a delegation from the International Republican Institute (IRI) led by President Daniel Twining. Also present was Delaware Senator Chris Coons,” Mr Odinga was quoted as saying.

“We held a very candid and productive discussion that centred on Kenya’s political situation with particular emphasis on threats to democracy, constitutionalism and rule of law.

The role credible elections play towards the stability of any nation’s democracy was discussed at length,” he went on.

“Our coalition maintains that justice must be done for our people through conducting of free and fair elections as ordered by the Supreme Court.”

While his meeting with US government officials was limited, Mr Odinga’s socialisation with congressional committee members such as Mr Coons, who has a compelling grasp of Kenya’s political and social dynamics, will go a long way in presenting Nasa’s narrative to the circles of US Congress and government.

His direct criticism of Western diplomats was a big indictment. The United States and Britain  have historically played a significant role in advocating political pluralism and democratic principles.

Nasa principal Musalia Mudavadi on Saturday hinted at plans to seek a referendum to change the Constitution to ensure electoral justice. He said Nasa had resorted to invoking the people’s power as a means of pushing for reforms and justice.

Mr Mudavadi noted that one such way of invoking people’s power is through the opposition’s push for establishment of People’s Assemblies.

“We do not recognise the elections of August 8 and October 26. We want a new constitutional arrangement, electoral justice and respect for every vote cast,” said Mr Mudavadi while addressing a burial ceremony in Vihiga.

Secrets of Raila US tour revealed Reviewed by samrack on November 12, 2017 .

Secrets of Raila US tour revealed National Super Alliance leader Raila Odinga returns to Kenya on Thursday from his week-long tour of the United States to unveil a new action plan believed to enjoy the backing of key American politicians and bureaucrats. Nasa principal Moses Wetang’ula revealed in an interview with the Sunday Nation that