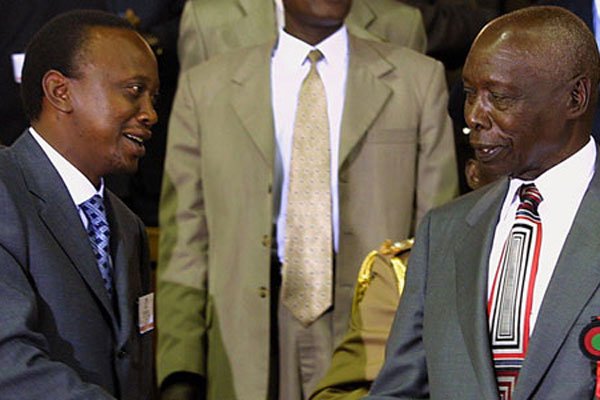 Contrary to popular belief that President Uhuru Kenyatta was Mzee Moi’s choice of successor, revelations by a former spy chief show that he was indeed the Plan B. While many claimed Moi’s choice was a gamble that turned out to be a masterstroke, it was a decision made out of paranoid fear of the old guard in Kanu at the time and frustrations of being rebuffed by his favourite man, Mwai Kibaki.

According to Moi-era spymaster Joseph Kibati, the President had approached Kibaki, at the time an opposition leader, to have him as his successor.

Author Bart Kibati of MEMOIRS OF A KENYAN SPYMASTER giving his speech during the book launch at Kenya National Theatre #KenyanSpymaster pic.twitter.com/Wo16ScyWIx

In a new book, Mr Kibati reveals that it was only after Mr Kibaki rebuffed Moi’s overtures that he settled on Mr Kenyatta, then a non-politician living in the shadows of his prominent family.

Mr Kibati writes in his book, Memoirs of a Kenyan Spymaster, that the former President, who was buried on Wednesday at his Kabarak home in Nakuru County, confided in him in early 2001 that his bid to woo Mr Kibaki for a political alliance had been futile.

Mr Kibati, who rose to be deputy director of the intelligence service, narrates how Mr Moi invited him to State House in February 2001 to discuss the role of the Mt Kenya region in the coming year’s polls.

He says he was surprised when he received a call from then Kenya Tourism Board chairman Uhuru Kenyatta, asking him to visit State House the following day. At the time, Mr Kibati, father of former Kenya Vision 2030 director-general Mugo Kibati, had retired from government service but was still well versed in the goings-on in the country, owing to his previous job as an intelligence officer.

“Moi got me off-guard by bluntly asking me why Kikuyus did not like him. He conceded that they had helped make him President, but he believed he had also done a lot to reciprocate. He could simply not understand their hostility,” writes Mr Kibati.

That is when Mr Moi admitted that he had approached Mr Kibaki on two occasions seeking a political union. The President said he believed that his then Vice-President, George Saitoti did not like him also.

“He said if Kibaki, who he had unsuccessfully tried to reach through (the late) Njenga Karume, continued to oppose him, then he would not hesitate to leave the leadership to Uhuru Kenyatta, Raila Odinga or somebody else,” writes Mr Kibati.

Had Kibaki agreed to Moi’s overtures, the course of Kenya’s history would have changed dramatically. However, he stood his ground, saying he wanted nothing to do with Moi, with whom he had parted ways in December 1991 after he resigned as Health minister and founded the Democratic Party.

Later, in June 2002, President Moi would visit Mt Elgon and declare Uhuru Kenyatta his preferred successor, ushering in the collapse of the mighty Kanu and the eventual defeat of the late President’s man in the December General Election.

Moi’s choice was a shocker to his close political friends, and while some bolted to join the opposition, others remained to support Mr Kenyatta, mostly out of respect to the then retiring President.

Having been a political grandmaster who played his ministers against each other, sometimes humiliating them, Moi was apprehensive that if anyone else other than the young Kenyatta rose to the presidency, they might seek revenge.

Conversations with a number of politicians close to both Mr Kenyatta and Mzee Moi at the time reveal a President who did not trust even his loyal ministers. And Moi did not lack willing ministers to take over from him.

There was Vice-President George Saitoti (now deceased), ministers Raila Odinga, Katana Ngala, Musalia Mudavadi, Kalonzo Musyoka and Katana Ngala, each of whom believed he was in pole position to take over, with Moi’s blessings.

Moi had worked with and observed all the politicians and knew what they thought about him.

This week, those who spoke to the Nation  said Moi knew who was likely to seek revenge if they took over the reins of power. He also knew the capabilities of each leader and Mr Kenyatta was brought on board mostly because he did not harbour any ill feelings, having been a political greenhorn.

Moi also knew Uhuru was a person he could rely on once he retired. During his burial this week, President Kenyatta described Moi as a father figure.

“I witnessed his love, I listened to his advice, which I have applied as an adult. I also got to learn politics first-hand from the professor of politics himself,” he said.

But Moi may also have wanted Uhuru to succeed him from as early as 1996, when he carved out several constituencies in Central Kenya, including splitting Gatundu constituency to give Mr Kenyatta a safe passage. This did not happen, and Moi stayed for 14 months without a vice-president as he grappled with his succession plan. It was not until October 2001 that Mr Kenyatta was nominated to Parliament and it became clear what his political mentor was up to.

“At one time, some thought of seeking counselling sessions because they couldn’t believe having spent many years fighting Kanu they were now facing prospects of supporting it. It’s not a secret we were in the opposition. After he made that announcement (that Uhuru Kenyatta was his preferred successor) he called us for a meeting where he asked us to support his choice.”

He said the only plausible explanation for the choice was that he was returning the favour to the Kenyattas.

“We can’t say my cousin (Kenyatta) at that point was more experienced than Moi’s ministers,” said Captain Kung’u.

Matere Keriri, a trusted friend of Mr Kibaki since the 1960s, wonders whether Moi was seeking a super alliance after he took in Raila Odinga. “If there was to be a super alliance, would he have treated Kibaki the way he treated Raila eventually?” asked Mr Keriri, referring to the eventual decision by Moi to pick Kenyatta.

Nominated MP Maina Kamanda, who was a DP legislator at the time, confirmed that Moi made overtures to Kibaki but was rebuffed. He believes, however, that the aim was to divide the opposition further after “poaching” Mr Odinga.

“He could see that Kibaki was growing stronger by the day and he wanted to curtail his chances. Kibaki would have been tricked had he agreed to meet Moi. Moi wanted Uhuru all along and he wanted Kibaki to lose face then have him endorse Uhuru,” says Kamanda.

Parliamentary Speaker Justin Muturi, who has been a long-time friend of President Kenyatta, said: “Perhaps Moi’s reason was because Uhuru appeared to be a safe bet. Some of those around Moi could not be trusted.”

Secrets: How Kibaki forced Moi to pick Uhuru Reviewed by samrack on February 15, 2020 .