Rwandans held in Burundi as more refugees trek in 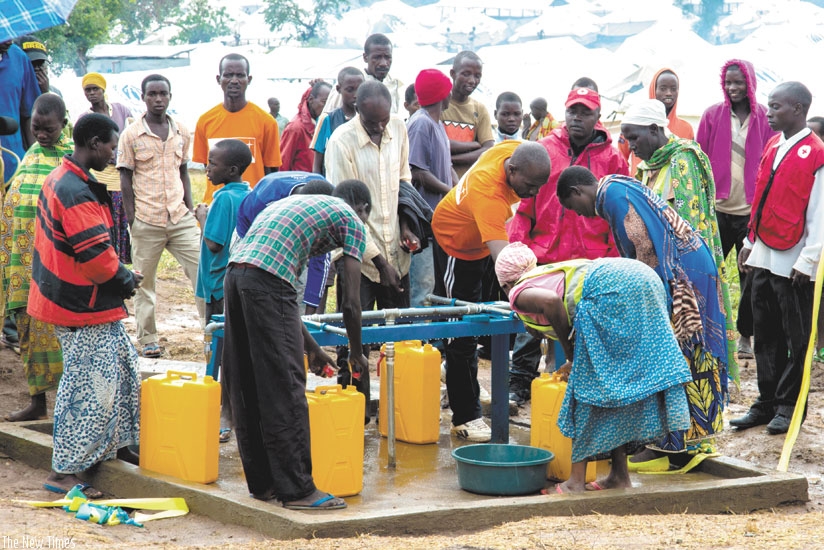 Burundian refugees at Mahama camp fetching water. More refugees continue to pour in, as some reports suggest that some Rwandans have been held illegally by Burundian authorities in unclear circumstances. (File)

Rwandans held in Burundi as more refugees trek in

Many Rwandan nationals are being held by Burundian security agencies under circumstances that remain unclear.

According to reliable sources, over 30 Rwandans on board buses traveling to Bujumbura were disembarked on several occasions, arrested and taken to unknown destinations.

Amb. Amandin Rugira, Rwanda’s envoy in Bujumbura, confirmed the development but could not elaborate other than that his office was following up the matter.

“Yesterday, we wrote a protest Note Verbal with 12 names that we know, so far. We are still looking for the other names and where they are being held,” the Ambassador said.

“The Embassy is closely following the matter and we are in contact with the Ministry of External Relations [in Bujumbura].”

A Corpse Signals More Burundi Violence as President Sworn In

Tension has been high in the neighboring country, especially since April 26, when Burundi’s ruling CNDD-FDD political party picked President Pierre Nkurunziza as a candidate for a third term in office.

Nkurunziza took oath on Thursday in a surprise ceremony – he was expected to be sworn-in next week.

The AU, EU, and the US have all expressed concern that July’s election was not free and fair.

Meanwhile, when Sunday Times visited the Nemba One Stop Border Post, on Friday, there were signs that the border crossing was picking up, albeit slowly.

On Thursday, there were more people arriving than going. Siraj Katongole, a Ugandan truck driver who had halted operations to Burundi in the past four months, but resumed this week.

While his coffee-laden Fuso commercial truck was being checked by a clearing agent on the Rwandan side, Katongole told Sunday Times that on his way from Ngozi, a town in northern Burundi, there were many roadblocks.

A few minutes past midday, seven vehicles, including a passenger service minibus, arrived from the other side.

Sandrine Niyuhire and her two young kids and six other people were crammed in her brother-in-law’s small car.

All were fleeing insecurity in Bujumbura and heading to Kigali, with no plans to return home soon.

Niyuhire said: “Bujumbura appears calm today but people are frightened. On the road from Bujumbura, there are many police checkpoints. I heard that people were forced to turn back simply because their papers indicated that they come from Nyakabiga, in Bujumbura, where there were many anti government protests.”

Niyuhire’s younger sister, Nadine Irishyura, said she had earlier fled to Kigali but ran out of money and was forced to return home.

This time around, she said, she returns a little more prepared to cope.

The two families, Irishyura said, are renting a small house in Kicukiro, Kigali, and hope to stay until the situation back home stabilises.

Rwanda is now home to more than 72,000 Burundian refugees.

Rwandans held in Burundi as more refugees trek in Reviewed by samrack on August 25, 2015 .