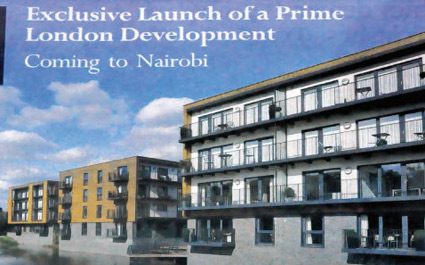 Kenya’s super-rich are stashing their money abroad and might relocate there in just under 10 years to safeguard the interests of their children, according to the report on global wealth.

Mr Andrew Shirley, editor of the Knight Frank Wealth report, says there is an increasing interest in property in the United Kingdom and Dubai.

Mr Shirley explained that with a lot of the wealthy children studying abroad, they have acquired global exposure and are more open to opportunities out there.

“There is a great mobility of wealth, with Africans and Kenyans buying property abroad. London is the most popular for Kenyans searching for property followed by Dubai,” he told the Nation in Nairobi yesterday.

According to Mr Shirley, 24 per cent of Africa’s super-rich plan ditching the continent in the next decade for personal security, political issues and to access a higher quality of education, health and life.

With at least 202 new entries into the elite club of dollar millionaires last year — pushing the current figure to 8,500, up from 8,300, and which is expected to grow 80 per cent to 15,300 in the next 10 years — Kenya might witness significant amounts of wealth locked abroad.

The preference for safe havens also casts a shadow on the sources of the money in the hands of Kenya’s super-rich, who might be out to protect proceeds earned through corruption.

Deon de Klerk, head of Africa and international for Standard Bank Wealth and Investment, said they had witnessed the trend especially with inherited wealth where the young billionaires are mostly global citizens. Standard Bank owns CFC Stanbic, which partnered with Knight Frank for the study.

“We find our clients to be much multi-jurisdictional than ever before, with families often ending up dispersed around the globe,” he said.

The super-rich, however, carry their Africanness along, preferring to buy residential property as an investment but also as a safe haven for their wealth.

“The majority of our high-net-worth clients across Africa seek international diversification, with an ever increasing appetite for real estate,” de Klerk said.

Residential real estate accounts for a quarter of the average Ultra High Net Worth Individuals’ investable wealth, according to the survey, while commercial property investments make up 11 per cent.

Interest in commercial property is also growing strongly, with 47 per cent of wealth advisers predicting an increased portfolio allocation by their clients over the next 10 years.

Offices and hotels are predicted to remain the investments of choice, although warehousing and logistics could overtake shopping centres and high-street retail, according to the survey.

Share thisFacebookTwitterPinterestEmailWhatsApp Rich Kenyans splash millions on London property Kenya’s super rich are stashing their money abroad and might relocate there in just under ten Home ownership is pursued almost as a right in Britain but the housing market has a history of boom and bust — and fears are growing of a new bubble.