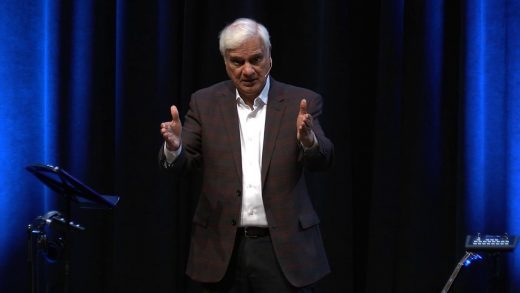 Reuben Kigame who lives with his family in Eldoret, Kenya, got connected to Ravi’s ministry in his mid twenties. When he was 28, he took his first training with RZIM in Johannesburg, South Africa. He was to receive three years of active apologetics training under RZIM’s Institute of Christian Apologetics in Atlanta. Through RZIM, Kigame got connected to the Southern Evangelical Seminary, S.E.S., an Apologetics graduate college in Charlotte, North Carolina, started by Ravi’s teacher, Dr. Norman Geisler.

Dr. Geisler passed on last July at the age of 80, having served the Lord through Christian Apologetics. In this video, Mr. Kigame eulogizes his friend and mentor, Ravi Zacharias, but cannot help revisit the loss of yet another friend and mentor, Dr. Geisler, to whom Kigame dedicated his 2018 497 page book, Christian Apologetics Through African Eyes. (Available on Amazon both as paperback and Kindle). In the book he also talks about how Ravi greatly influenced his life and where it all began. When Kigame established Fish FM, a Christian English station in Eldoret in 2006, he had Ravi on air almost daily with two of Ravi’s programmes, “Let My People Think” and another called “Just Thinking.” Many listeners in Western Kenya who listened to the station got to know and love Ravi’s passionate defense of the Christian faith. Reuben shut down the station in 2015 following many let-downs. As you watch, please pray for Ravi’s family(Wife Magie and children, Sarah, Naomi and Nathan and extended family) as well as the RZIM team. Also pray for Reuben’s desire to continue the apologetics legacy Ravi started in him about 26 years ago.

Ravi Zacharias, who spent his life defending Christianity through books and lectures, has died. He was 74.

Zacharias had been battling sarcoma and died at his home in Atlanta on Tuesday, Zacharias International Ministries said.
He was a leading figure among Christian Apologists — a branch of Christian theology that defends Christian doctrines against objections.
Zacharias founded Zacharias International Ministries in 1984, and “launched a global team of nearly 100 Christian scholars and authors who continue to speak, resource, train and address the questions of millions around the world,” a news release said.
Reuben Kigame mourns his friend and mentor Ravi Zacharias Reviewed by samrack on May 19, 2020 .

Ravi Zacharias dies at 74Apologist and author dies of cancer after a decades-long teaching ministry Reuben Kigame mourns his friend and mentor Ravi Zacharias Reuben Kigame who lives with his family in Eldoret, Kenya, got connected to Ravi’s ministry in his mid twenties. When he was 28, he took his first training with RZIM in