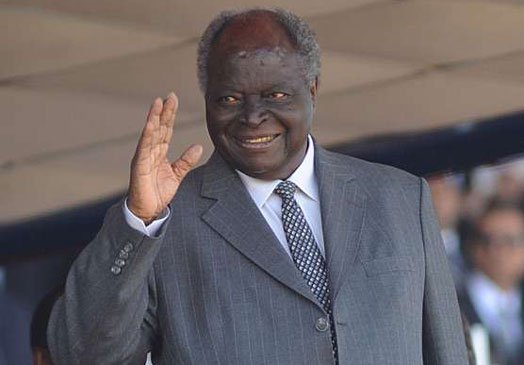 The former head of state was accompanied by the county commissioner Ngumo Kaluku, Land PS Nicholas Muraguri and County AP commander Njue Njagi when he voted at around 5pm.

Mr Kibaki was expected to cast the ballot at Munaini Primary school in Othaya between 10:30 am and 11.30 am. However, by 2:50pm,  there were no signs he would show up to vote. His name was not in the voters register pasted outside the polling station.

Two of his security men made four trips in and out of the polling station assuring journalists the former President was on his way.

They at one point came back with an Identification and two voters cards believed to belong to Mr Kibaki.

The returning officer at the station declined to speak to the media and even barred the media from taking pictures at the polling station.

Munaini Primary School has been Kibaki’s polling centre for more than three decades.

However, Nyeri South Deputy County commissioner Stanley Kamande declined to comment on the confusion of the former Presidents name missing in the voter’s list.

“We are still expecting him to come vote,  it is still early. We are working on the issue,” he said. The constituency returning officer Anncieta Musau said she was not aware the former President was missing in the voter list.

“The only way to confirm someone is on the list is by the voter coming to the polling station to vote. I am not aware of that situation,” she said.

The media was also barred from entering the voting room by the security details but were later let in while he was at the voting booth. The former president left the polling station at 5:45 pm.

Mr Kibaki seemed to be in good health as he walked together with his security personnel.

Retired President Mwai Kibaki was among the last voters to cast their ballot in Munaini polling station in Othaya, Nyeri.

Former President of the Republic of Kenya Mwai Kibaki. FILE PHOTO RETIRED PRESIDENT KIBAKI FINALLY VOTES AFTER HITCH The former head of state was accompanied by the county commissioner Ngumo Kaluku, Land PS Nicholas Muraguri and County AP commander Njue Njagi when he voted at around 5pm. Mr Kibaki was expected to cast the ballot