Millennials May Be About To Shake Up Kenyan Politics 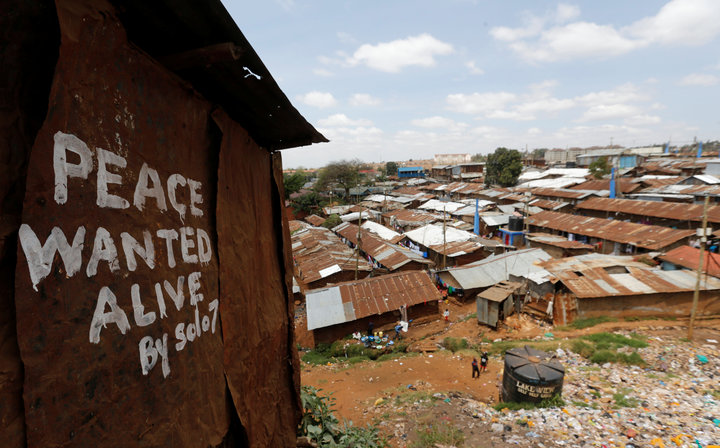 In a country where ethnicity is the dominant form of political organization, will the “youth vote” make a difference?:Thomas Mukoya / Reuters

Millennials May Be About To Shake Up Kenyan Politics

NAIROBI, Kenya ― Starehe constituency sits almost at the dead center of Kenya’s capital, Nairobi. The city’s central business district makes up part of the constituency, as well as residential housing areas that run the whole spectrum from fairly well-to-do middle class, to informal settlements and slums. It is the largest single constituency in the country, with over 130,000 registered voters.

Perhaps in a way, it is apt that this place is ground zero for a demographic shake-up that has been a long time coming in Kenyan politics. Because of its size, population and economic importance, what happens in Starehe is significant, a canary in the coal mine of a change in Kenyan and regional politics that may increasingly have young people at its center.

For the past five decades Starehe constituency has been represented by politicians with deep links to the business class that came up after independence in Nairobi ― a small elite group of city traders, industrialists and real estate tycoons.

After 50 years, they are now entering their sunset years, many of them having amassed a fortune, by both legal and unscrupulous ways.

But this year, the whole group of “old school” politicians ― including the incumbent member of parliament ― were trounced at party primaries a few months ago, and the three men who emerged as frontrunners are all under the age of 35, a generational change whose impact will be watched keenly in Kenya.

STAREHE IS A CANARY IN THE COAL MINE OF A CHANGE IN KENYAN AND REGIONAL POLITICS THAT MAY INCREASINGLY HAVE YOUNG PEOPLE AT ITS CENTER.

Around 80 percent of the country’s population is younger than 35, and for the first time, a major parliamentary contest, right in the heart of the city, is playing out within that demographic.

It signals the start of the end of an era in Nairobi politics, and perhaps in Kenyan and African politics more broadly, as the grip that older politicians have had is loosened by the simple factor of time and demographic change.

This does not necessarily mean that young people will usher in a new utopia. But at least it’s a start.

Yet in a country where ethnicity is the dominant form of political organization, will the “youth vote” make a difference more broadly?

“Young people in Kenya often don’t feel that they are a powerful voting block,” said Nerima Wako, a 20-something-year-old who’s executive director of Siasa Place (the place of politics in Swahili), a nonprofit that works to engage young Kenyans in politics and governance.

There are many other competing identities that intersect with age – ethnicity and class are the two most powerful ones. Rather than being different, young people are often co-opted into these more dominant forms of political organization in Kenya.

Odanga Madung, a 25-year-old data scientist and owner of a rising tech business in Nairobi, agrees.

“Tribal politics is so endemic in this country that most youth political organizations coming up are easily splintered by appealing to ethnic identities,” he said. “That makes it difficult to really sustain a ‘youth vote’ in the classic sense.”

Still, the Starehe three are a motley bunch, and will make for a very exciting race, regardless of who wins. They may redefine how young people are seen in political circles in Kenya and the region more broadly ― until now, their main roles were as hangers-on, cheerleaders and even militia and hired goons.

Leading in the polls, albeit by a slim margin, is Boniface Mwangi – a photographer and artist-turned-firebrand political activist and organizer.

Mwangi spent many of the past few years denouncing politicians in the most strident and sensational ways – he once let pigs loose in front of parliament and drenched them in blood, to highlight the greed of politicians (“MPigs,” he called them). Now, he says he wants to clean up the system from the inside.

Having created the image of a force for moral change, he does not give voters cash handouts like most politicians do, but, incredibly, ordinary people have been giving money to him for his campaign – sometimes in sums as little as 10 cents.

It is a shift that was seen before in Uganda, where opposition politician Kizza Besigye, who sufferednumerous defeats, surprised many who had written off his political career by mounting an energized and electrifying presidential campaign in the 2016 election against incumbent Yoweri Museveni.

Instead of giving out cash, villagers would go to his campaign rallies and give him small gifts to support his campaign, including very small cash contributions, but mostly in kind ― chicken, rabbits, sheep, or even just a handkerchief to wipe his face, as a way of expressing gratitude for the years of beatings, arrests and tear gas he has faced fighting for the rights of ordinary Ugandans.

They probably knew that Besigye would not win against Museveni ― as incumbent, the latter was backed by powerful state machinery ― but they wanted to make a statement that they appreciate his work in the struggle. The same kind of resonance with ordinary people is what Mwangi is finding in Starehe.

Running against Mwangi is Charles Njagua Kanyi, a popular musician better known by his stage name, Jaguar. His songs are feel-good pop, a string of similar sounding hits. In fact, in a now ironic way, one of his more popular songs is “Kigeugeu,” a Swahili word which roughly translates to “hypocrites” or “fraudsters,” in which he laments the duplicity of politicians. Now, it seems he’s hoping to ride his celebrity status all the way into that same parliament.

And the third contender is Steve Mbogo, a candidate who claims to be a businessman, but whose source of wealth many still question, and whose claim to leadership seems to be on this basis alone – that he is wealthy.

What makes the contest even more significant is that all three candidates are from the same ethnic community, in a country where ethnicity is the most prominent fault line in national politics. Now, without that as an overt factor, it is the perfect “natural experiment,” where the strong differentiating effect that ethnicity usually has on politics will be suppressed.

“Starehe is definitely a race to watch,” Wako said. “The three candidates are all young – and if I could describe each one’s claim to the parliamentary seat: one is rich, one is famous and one is an activist. The way the vote goes will tell us a lot about the place of young people in Kenyan politics. Perhaps nothing will change. But maybe, something will.”

‘TRIBAL POLITICS IS SO ENDEMIC IN THIS COUNTRY THAT MOST YOUTH POLITICAL ORGANIZATIONS COMING UP ARE EASILY SPLINTERED BY APPEALING TO ETHNIC IDENTITIES.’
ODANGA MADUNG, A 25-YEAR-OLD DATA SCIENTIST

Madung fears the election will bring about the usual violence. He’s especially worried that his nascent, tech-dependent business could be caught flat-footed.

“I was completely taken aback the other day when one of our clients asked us for a mitigation plan, and I hadn’t realized how unprepared we were in the case of instability,” he said. “Getting questions like: ‘How will you ensure continued service delivery in case the roads are closed, or the GSM [global system for mobile communications] network shut down?’ painted a very grim reality for me.”

Madung says that his hope is that there would be no violence.

“This is a country that offers little economic opportunity in the way of employment, and if you asked me what was more important ― a credible election or peace ― I think peace would come first. Yes, let there be a credible election, but let us also forgo violence in case of a dispute. A lot is at stake here.”

More insights on the hopes, fears and disappointments coloring the election come from Wako’s organization, Siasa Place. Last August, together with German political foundation Heinrich Böll Stiftung, they started an ambitious project called Election Diaries. Part of the project included having one young person from all 47 counties in Kenya keep a diary for one year, where they would write about their experiences, thoughts, feelings and fears as campaign season unfolded. At the end of the year, the diaries would be compiled into a book.

Within a few months, the original group of writers was then whittled down to 11, partly so that the journals could be easier to track in an in-depth manner – but also because so many of the diary keepers dropped out, citing a lack of motivation and the challenges of keeping a journal.

Still, there are some insights. One diary entry, titled “Politics pays, education doesn’t,” is written by an early-20-something named Niceta Nyaga, in Embu, a largely rural county near Mount Kenya.

Nyaga tells the story of Jeremy, her friend’s brother, who along with about 20 of his friends has spent the past five months on the campaign team for the local senator.

“The senator would provide them with transport[ation] from wherever they were, [and] lunch and accommodation at his home whenever he wanted to see them,” Nyaga wrote. “Their work involved social media campaigns, hashtags and Facebook posts to popularize the senator for the seat of governor, accompanying the senator wherever he goes and act[ing] as his cheerleaders [during rallies].”

‘THE WAY THE VOTE GOES WILL TELL US A LOT ABOUT THE PLACE OF YOUNG PEOPLE IN KENYAN POLITICS.’
NERIMA WAKO, EXECUTIVE DIRECTOR OF SIASA PLACE

This means that since the campaign started, Jeremy has only been to school for about one week in a month, she continued.

“He lies to his parents [that] he is in school, but they don’t know he is usually a stone[’s] throw away from them. To him that wasn’t a loss since he was being paid a good amount of money. … [but] he is missing out on his final year [of university] as a student.”

Nyaga said she was conflicted on how to process the situation.

“So what happens after the general elections to such youth?” she wrote in her diary. “No matter how much you try to [persuade] them out of being used and manipulated by these politicians, it’s a dead end. … What’s the solution? Do we give up on them till the general election, or what’s their salvation? Do these youth need salvation?”

Perhaps the race in Starehe would be a good place to start to answer this question. What happens when a young person isn’t merely a cheerleader to be “used and manipulated” but is actually a front-row candidate? The results in that city constituency ― whichever way it goes ― will perhaps be the start of that new day in Kenyan politics.

Millennials May Be About To Shake Up Kenyan Politics Reviewed by samrack on August 8, 2017 .

In a country where ethnicity is the dominant form of political organization, will the “youth vote” make a difference?:Thomas Mukoya / Reuters Millennials May Be About To Shake Up Kenyan Politics NAIROBI, Kenya ― Starehe constituency sits almost at the dead center of Kenya’s capital, Nairobi. The city’s central business district makes up part of the constituency, as