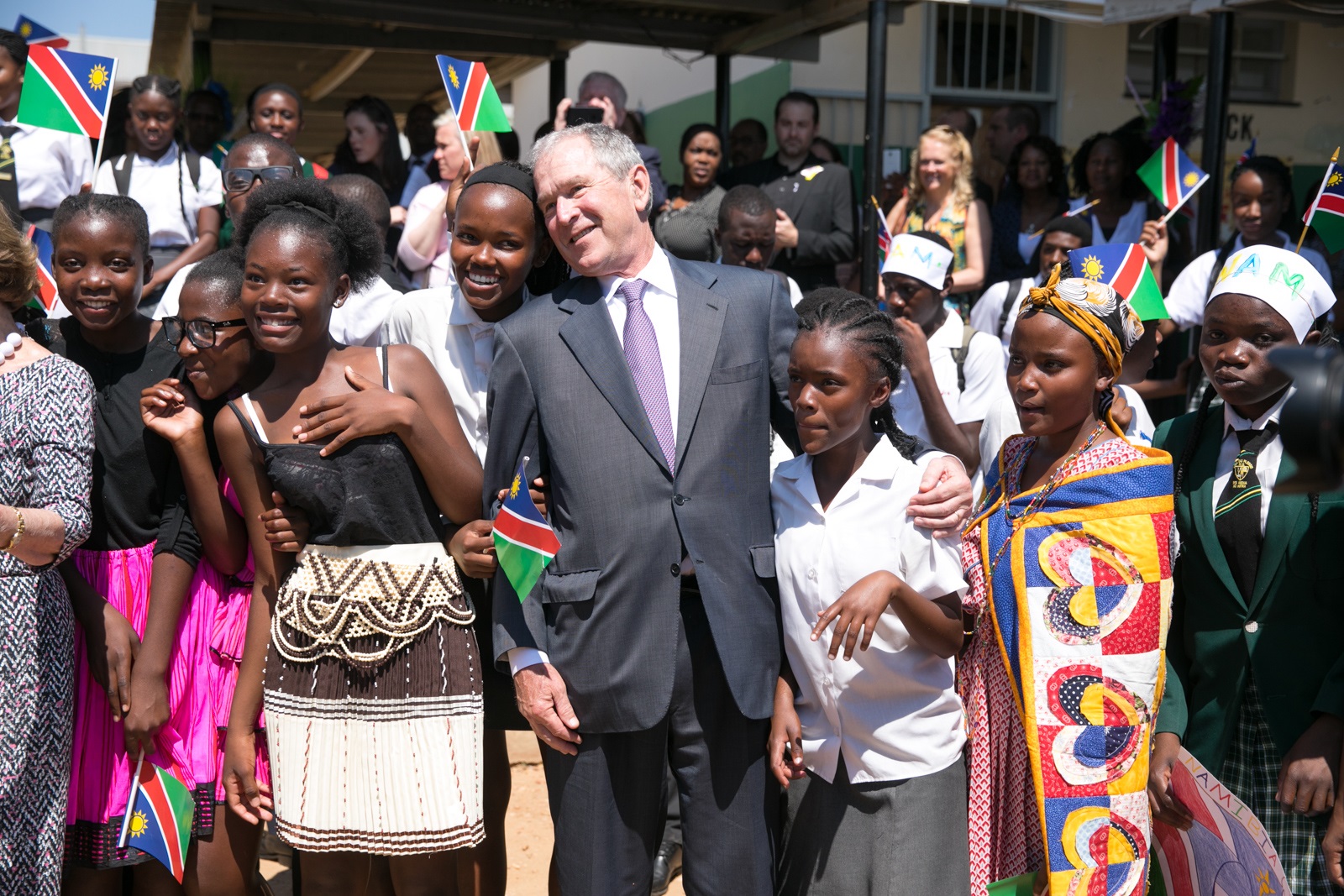 US President George W. Bush as he spoke at a primary school classroom in Botswana about efforts to treat and prevent cervical cancer, the most common and deadly cancer among women in the country and a leading cause of death among women living with HIV.CDC’s Division of Global HIV & TB, which plays an essential role in implementing PEPFAR, along with US National Cancer Institute (NCI), supports PRRR efforts through cancer control planning, cancer registries, cancer research, and cancer screening, treatment, and prevention. Pic:Photo Courtesy

Washington, D.C.—In advance of Mother’s Day, the U.S. President’s Emergency Plan for AIDS Relief (PEPFAR), the George W. Bush Institute, and the Joint United Nations Programme on HIV/AIDS (UNAIDS) today announced The Partnership to End AIDS and Cervical Cancer among HIV-positive women in Africa. Pending congressional approval, the United States will invest over $30 million through the renewed partnership. It will build on the earlier successes of Pink Ribbon Red Ribbon by refocusing resources and advocacy efforts for greater impact in eight sub-Saharan African countries to prevent cervical cancer progression and mortality among HIV-positive women.

“Thanks to the generosity of the American people, PEPFAR has saved the lives of millions of HIV-positive women around the world,” said Ambassador Deborah L. Birx, M.D., U.S. Global AIDS Coordinator and Special Representative for Global Health Diplomacy. “We must ensure these same women – mothers, daughters, aunts, and grandmothers – who are living with HIV and thriving do not succumb to cervical cancer. By focusing on eight African countries where the HIV prevalence rate in women is over 10 percent and cervical cancer mortality among women is the highest, this partnership will accelerate our lifesaving impact.”

“Building on the success of Pink Ribbon Red Ribbon, the Bush Institute is thrilled to enter this renewed partnership with PEPFAR and UNAIDS, which will have an even greater impact and save more lives,” said Holly Kuzmich, Executive Director of the Bush Institute. “Our work has saved thousands, but this partnership will reach millions. On the fifteenth anniversary of PEPFAR, there is not a more appropriate time to deepen our partnership and see the vision of President and Mrs. Bush come full circle – that women who survive AIDS also live full lives free of cervical cancer.”

The partnership will ensure efforts are more effective and at a lower cost by refocusing on reaching HIV-positive women in eight target countries: Botswana, Lesotho, Malawi, Mozambique, Namibia, Swaziland, Zambia, and Zimbabwe. Women who are HIV-positive are 4-5 times more likely to develop invasive cervical cancer. According to UNAIDS, there are more than 3.5 million women living with HIV in these eight countries. The partnership also includes an accelerated strategy for prevention, screening, and treatment that would drastically reduce cervical cancer in HIV-positive women and significantly lower nationwide cervical cancer rates in sub-Saharan Africa.

More than 100,000 women are diagnosed annually with cervical cancer in sub-Saharan Africa, where it is the leading cancer killer of women.

About PEPFAR
PEPFAR is the United States government’s response to the global HIV/AIDS epidemic, which represents the largest commitment by any nation to address a single disease in history. Through the compassion and generosity of the American people, PEPFAR has saved and improved millions of lives, accelerating progress toward controlling and ultimately ending the AIDS epidemic as a public health threat. For more information, please visit www.pepfar.gov, and connect with PEPFAR on Twitter, Facebook, and Instagram.

About UNAIDS
The Joint United Nations Programme on HIV/AIDS (UNAIDS) leads and inspires the world to achieve its shared vision of zero new HIV infections, zero discrimination, and zero AIDS-related deaths. UNAIDS unites the efforts of 11 UN organizations – UNHCR, UNICEF, WFP, UNDP, UNFPA, UNODC, UN Women, ILO, UNESCO, WHO, and the World Bank – and works closely with global and national partners towards ending the AIDS epidemic by 2030 as part of the Sustainable Development Goals. Learn more at www.unaids.org and connect with us on Facebook, Twitter, Instagram, and YouTube.

Renewed Partnership to Help End AIDS and Cervical Cancer in Africa Reviewed by samrack on May 11, 2018 .

US President George W. Bush as he spoke at a primary school classroom in Botswana about efforts to treat and prevent cervical cancer, the most common and deadly cancer among women in the country and a leading cause of death among women living with HIV.CDC’s Division of Global HIV & TB, which plays an essential