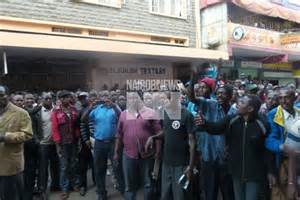 More than 200 boys and girls were on Tuesday arrested at a bar on Dubois Road in Nairobi.

The minors, some of them as young as nine-years-old, were drinking alcohol and dancing when police arrested them at Jerry City Hotel and Bar.

Another 150 adult revellers were also seized at the same club.

During the 3pm swoop, four employees of the pub were arrested.

Police found the children with alcohol in cans, rolls of bhang and condoms. The minors are suspected to have arrived at the pub at 8am.

“Our officers arrived at the club and arrested the children. We have taken them to Central Police Station where they would stay until they are taken in court,” he said.

Mr Wanjama said officers are looking for the owner of the club, who was not at the premises at the time of the police raid.

“We already have leads on where he may be. In the meantime, we would interrogate the workers in police custody,” said Mr Wanjama.

Police made 10 trips to the club situated at the intersection between Tsavo Road and Accra Road.

Some of the arrested minors were too drunk. They were shouting at the police and even undressed as they were being taken to the station.

By Tuesday evening, police were still making trips to the club to collect the children, as angry onlookers surrounded the club, shouting and threatening to burn it.

It is not clear how the large number of children all met at the pub, but police said some of them had mobile phones. They said some came from as far as Dagoretti, Kangemi, Buruburu and South B.

One of the arrested minors said that he paid Sh100 to enter into the club.

The arrests come barely two weeks after police seized another 500 students at a basement disco in Eldoret Town where they were suspected to have been taking drugs and having ***.

In the Eldoret case, parents said the students had lied to them that they were going for choir practice, shopping or other innocent errands.

RAW: Police arrest more than 200 children in a club along Dubois Rd Nairobi, bhang & alcohol seized More than 200 boys and girls were on Tuesday arrested at a bar on Dubois Road in Nairobi. The minors, some of them as young as nine-years-old, were drinking alcohol and dancing when police arrested them at