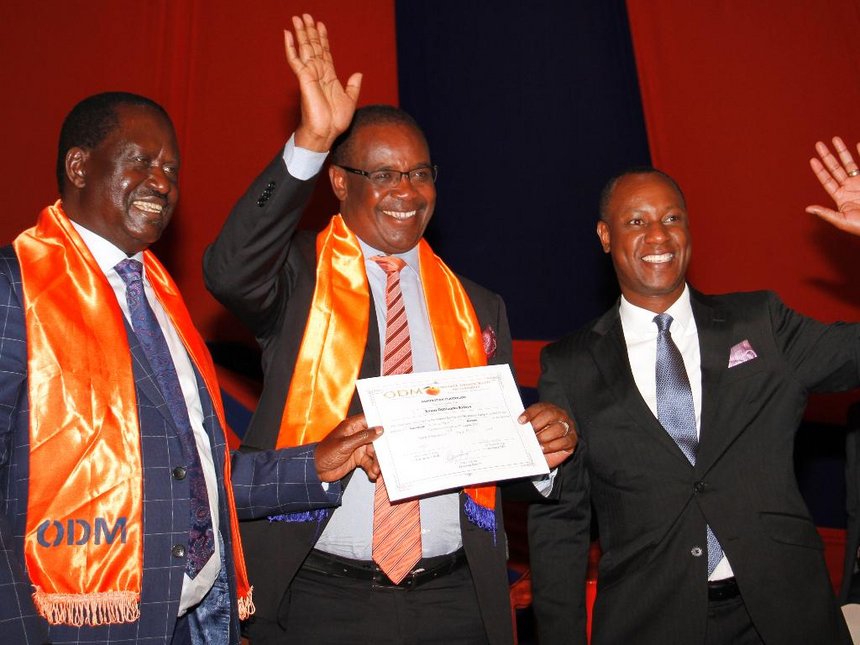 The core of ODM leader Raila Odinga’s presidential campaign team was named yesterday — six major governors — and all were gifted with direct nominations.

Others are nominated Senator Janet Ongera and Homa Bay woman representative Gladys Wanga. Later they will be joined later by four other leaders.

The election is four months away on August 8.

The governors will take charge of their regions and counties and help mobilise resources, raise money and handle logistics.

“This are our key people and they will manage the presidential campaign,” a senior ODM official said.

The party issued nomination certificates to 850 unopposed aspirants to participate in the August 8 polls.

The opposition Super Alliance is yet to name its flagbearer. Principals Raila, Wiper’s Kalonzo Musyoka, ANC’s Musalia Mudavadi and Ford Kenya’s Moses Wetang’ula have promised he will be announced this month.

All the four have been endorsed by their parties as NASA’s joint presidential flagbearer.

ODM says Raila should be supported yet again because he has the best chance of defeating President Uhuru Kenyatta.

Although Raila did not say any of those given direct nominations yesterday will be part of the presidential campaign, party officials told the Star the six governors will play big roles in the campaign.

Without revealing details, Raila said those given direct nominations need not worry about primaries so they can start campaigning in earnest.

“The countdown to August elections and the end of Jubilee begins today (yesterday). This day sets you free to do more for the party and for Kenya.

“It sets you free to begin laying out meticulous plans for the August elections where we must get the majority of MCAs, MPs, senators and governors. Ultimately, we must win the presidency. On this day, therefore, we set you free to begin hunting for our presidential votes and your votes,” Raila said.

The ODM leader expressed confidence in a NASA victory in August.

“I assure Kenyans we have a better chance than ever of winning and I am confident we will,” Raila said.

He tore into the Jubilee government for allowing Cabinet Secretaries and senior civil servants to actively engage in politics.

State House says they are not really campaigning. They just attend rallies and provide “accountability”.

Raila said tapping them during elections compromises the neutrality of civil servants and violates the Constitution.

However, the Constitution is silent on the issue.

Raila appears not to have read the Leadership and Integrity Act.

It excludes CSs and members of the county executive from a prohibition on campaigning:

An appointed State officer, other than a Cabinet Secretary or a member of a County executive committee shall not, in the performance of their duties—

(a) act as an agent for, or further the interests of a political party or candidate in an election; or

(b) manifest support for or opposition to any political party or candidate in an election.

He said CSs attend Jubilee rallies because they are accountable to the President who appointed them, but they do not campaign for the ruling outfit.

The former Prime Minister said allowing government workers to be involved in the political arena undermines the principle of “neutrality of civil servants and continuity in governments”.

Raila said civil servants campaigning for Jubilee are as stupid as the tick that blindly sucks blood from the host.

“We have tied the cow and placed a knife on its neck but the tick is still busy sucking the blood,” he said.

“We will send you home together with the Jubilee administration. ‘Wakati Jubilee wanaenda nyumbani mtafunga virago nao.’

“Jubilee knows it is going home. It is putting all its hopes for re-election on only two things — falling out in NASA, which will not happen, and rigging the elections, which we will not allow,” he said.

ODM’s National Elections Board chairperson Judith Pareno said nominations this month will be free and fair. She warned that violent leaders will not be tolerated..

“I know this house as big as it is, you can step on other’s toes. But we are doing our best.

We have put in place election dispute tribunal committee, we have recruited and trained county and constituency election panels,” she said.

Leaders who spoke urged the NASA party partners to allow Raila fly the alliance’s flag, saying he is the only leader with the national face and stature and has ability to send President Uhuru home.