RAILA ODINGA IT IS FOR NASA! 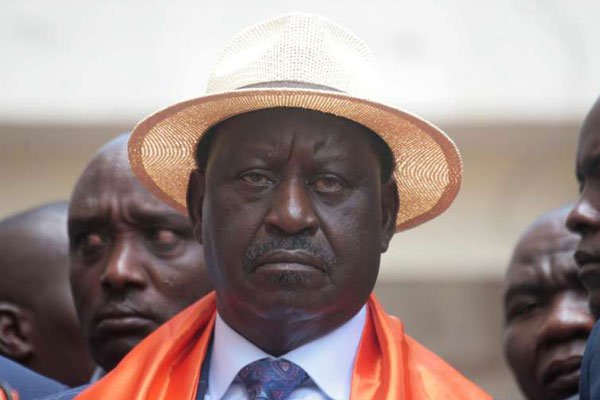 ODM leader Raila Odinga who is one of the four contenders for the National Super Alliance (NASA) presidential ticket. PHOTO | JEFF ANGOTE

RAILA ODINGA IT IS FOR NASA!

Mr Odinga was unveiled at a mammoth rally at the Uhuru Park on Thursday afternoon.

Musalia Mudavadi of ANC will be the Premier Cabinet Secretary, deputized by Isaac Ruto and Moses Wetangula.

Mr Mudavadi said the lineup was reached after nightlong negotiations. He said the objective of forming a united opposition has been achieved. “This was Phase One,” he said.

“It does not matter  I had the ball first. But I have passed it to a team member at a vintage point to score.”

Ford Kenya leader Moses Wetangula said whoever is going to be picked today will be the first among equals. He said he will be just the captain of the team.

“Somalia is complaining about Kenya. Tanzania is drifting away. South Sudan is also complaining. We need to mend fences,” he complained. “Central Province residents are also Kenyans but other parts of the country need development too.”

Bomet Governor Isaac Ruto said there are people “who have grabbed our country and made us beggars and poor in our own land”.

“We want all Kenyans to live with dignity and respect as envisioned in the new Constitution,” he added. “The writing is on the wall. Imeandikwa mko tu na siku less than mia moja. Tunataka kuambia Jubilee kwaheri.”

He also apologized for voting for Jubilee in 2013.

“The time to divide the country along tribal lines is over. Time to vote for level-headed people to run the country,” said Mr Ruto.