Raila daughter to contest for Kibera MP in 2017 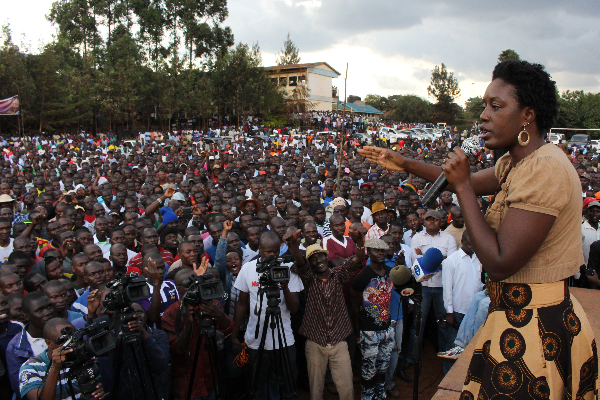 It is understood that family members have been putting pressure on Raila’s second daughter to join politics in 2017 and not 2022, as she had planned following the death of her elder brother Fidel last year.

She will this weekend launch her bid for the Kibra (previously called Kibera) parliamentary seat, which her father held for two decades. Officially, she is due to launch a voter and ID registration drive, but, unofficially and according to sources close to her, Rosemary will be testing the waters before a formal announcement is made.

Her political moves within the informal settlement are already causing jitters- amid fears that she could be favoured in ODM party primaries, thus unfairly eliminating competition. “We are almost 100 per cent sure that Rosemary intends to run. Many people, including MPs, are urging her on.

But she is still playing her cards close to her chest,” a Cord MP close to the former Prime Minister told the Star. This weekend, Rosemary is scheduled to crisscross the constituency in a caravan to mobilise residents for massive ID and voter registration, a strategy she announced is meant to propel her father to State House.

“Next weekend Saturday I will come here in person so that you register as voters and take IDs ready for the next polls,” she told a mammoth rally at Olympic Primary School last Sunday.

The Olympic rally, which also doubled as a fundraiser for the Mzalendo Self-help Group, was led by Raila himself, heightening speculation that he is preparing Rosemary to inherit his political turf. Her moving tribute to Fidel thrust her into the political limelight and, since then, Rosemary participates in Cord’s political activities even in her father’s absence.

She was, for example, on the by-election campaign trail, in full ODM regalia, for the party’s Kajiado Central candidate Elijah Memusi alongside other luminaries.

Rosemary did not answer her phone calls or respond to text messages. But in a telling press statement, Raila’s former Presidential campaign manager Eliud Owalo, who has declared his interest in the Kibra seat, warned against imposing candidates on the people ahead of 2017.

“I have publicly impressed upon the ODM Elections Board to provide a level playing field for all aspiring candidates and be professional in their management of party nominations so as to give wananchi the discretion to elect leaders of their choice,” Owalo said after the Kibra rally on Sunday.

As though anticipating Rosemary’s candidature, Owalo went on: “Having served as head of the Presidential campaigns in the last elections, I am aware that mismanagement of party nominations and apparent imposition of parliamentary candidates on the people led to voter apathy in our strongholds.

It is therefore prudent and imperative that the party exercises impartiality in the primaries this time round to avert a repeat of the same fiasco.” But contacted yesterday, Owalo, also a close confidant of Raila’s, maintained that he was in the Kibra race all the way. “I am not in control of who can run against me or who will not.

However, I have made up my mind to run for the seat,” he told the Star. The Kibra seat will create a dilemma for Raila, who is re-branding for a make-or-break battle at the 2017 polls. Besides Rosemary and Owalo, current MP Ken Okoth is also perceived to be in Raila’s inner circle.

ROSEMARY Odinga, eldest daughter of Cord leader Raila Odinga, has finally bowed to pressure and decided to join politics. It is understood that family members have been putting pressure on Raila’s second daughter to join politics in 2017 and not 2022, as she had planned following the death of her elder brother Fidel last year.