QATARI BILLIONAIRES WHO CALLED ON UHURU AT STATE HOUSE – PHOTOS 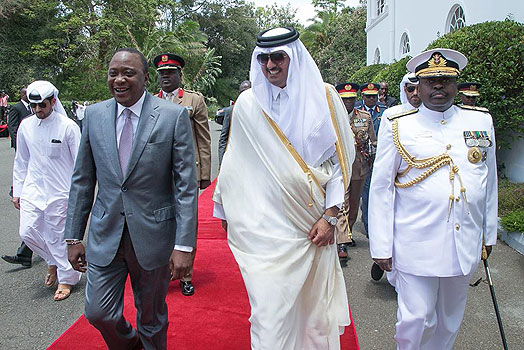 QATARI BILLIONAIRES WHO CALLED ON UHURU AT STATE HOUSE – PHOTOS

By AGGREY MUTAMBO
President Uhuru Kenyatta and Qatar Emir Sheikh Tamin Bin Hamad Al Thani, who was in Nairobi this week, signed various agreements meant to promote tourism, culture, education and scientific research.But just who was in the Emir’s delegation?The Nation has learnt the Gulf nation leader was accompanied by more than two dozen billionaires forming his delegation. They were the who-is-who in the Qatar government and business circles.

He was with Sheikh Khalifa Bin Jassim Bin Mohammed Al Thani, the Chairman of the Qatar Chambers, Mr Akbar al-Baker, the Chief Executive of the Qatar Airways which is reportedly interested in a stake in Kenya Airways, as well as Abdulaziz bin Nasser al-Khalifa, the boss of Qatar Development Bank which often gives loans to Qatar state agencies involved in agricultural projects.

Were they seeking business or just providing an influential entourage to the Emir?

Our Sources say many other discussions were held signaling thawing relations, but no tangible agreement was reached.

Relations between Kenya and Qatar have only recently started to look up. They were punctuated with suspicions and distance with Qatar suspected of being behind a case filed by Somalia at the International Court of Justice over a maritime boundary.

Today, no meaningful Qatar investment exists in Kenya other than occasional relief support to communities in north eastern.

This is despite the fact that at least 15,000 Kenyans work in Qatar as professionals. The number could be higher if we include casual labourers.

In fact the two countries did not even have active diplomatic relations until 2010 when Kenya established an embassy in Doha and Qatar responding two years later in Nairobi.

In fact, trade between the two countries has only recently started to look up, rising from Sh1.9 billion in 2008 to Sh6.6 billion in 2015.

QATARI BILLIONAIRES WHO CALLED ON UHURU AT STATE HOUSE – PHOTOS Reviewed by samrack on April 13, 2017 .