Kenyatta National Hospital (KNH) has in the recent days been on public spotlight for a number of wrong reasons including baby theft. Photo: KNH

Kenyans have taken to social media to give their views after it emerged on Thursday evening that surgeons at Kenyatta National Hospital (KNH) performed brain surgery on wrong patient – Whereas some were angered by the embarrassing and costly blunder, a few appeared to come to the defense of the giant health facility arguing that such cases are not new – Another section of Kenyans advised the victim of the wrong surgery to slap the hospital with a lawsuit and demand compensation – KNH has since suspended a neurosurgeon, two nurses and an anesthetist who are believed to have played a role in performing the brain surgery on wrong patient – This happened days after the national health facility was hit by “baby theft” scandal. A woman recently managed to sneak out of the hospital with someone’s baby.

Just when Kenyans were beginning to forget about the ‘baby theft saga’ that was recently reported at Kenyatta National Hospital (KNH), another scandal has hit the giant health facility. TUKO.co.ke on Thursday, March 1, learned that four KNH medics were suspended after they mistakenly performed a delicate brain surgery on wrong patient.

The Management of Kenyatta National Hospital has suspended the admission rights of a Neurosurgery Registrar and issued him with show-cause letter for apparently operating on wrong patient,” a statement signed by the hospital’s CEO Lily Koros Tare read in part.

The hospital’s management said it had also interdicted a ward nurse, theatre receiving nurse, and an anesthetist who are believed to must have played a role in the mishap. The four medics were reported to have conducted the surgery on Tuesday, February 27, 2018 prompting the hospital administration to send them on compulsory leave. 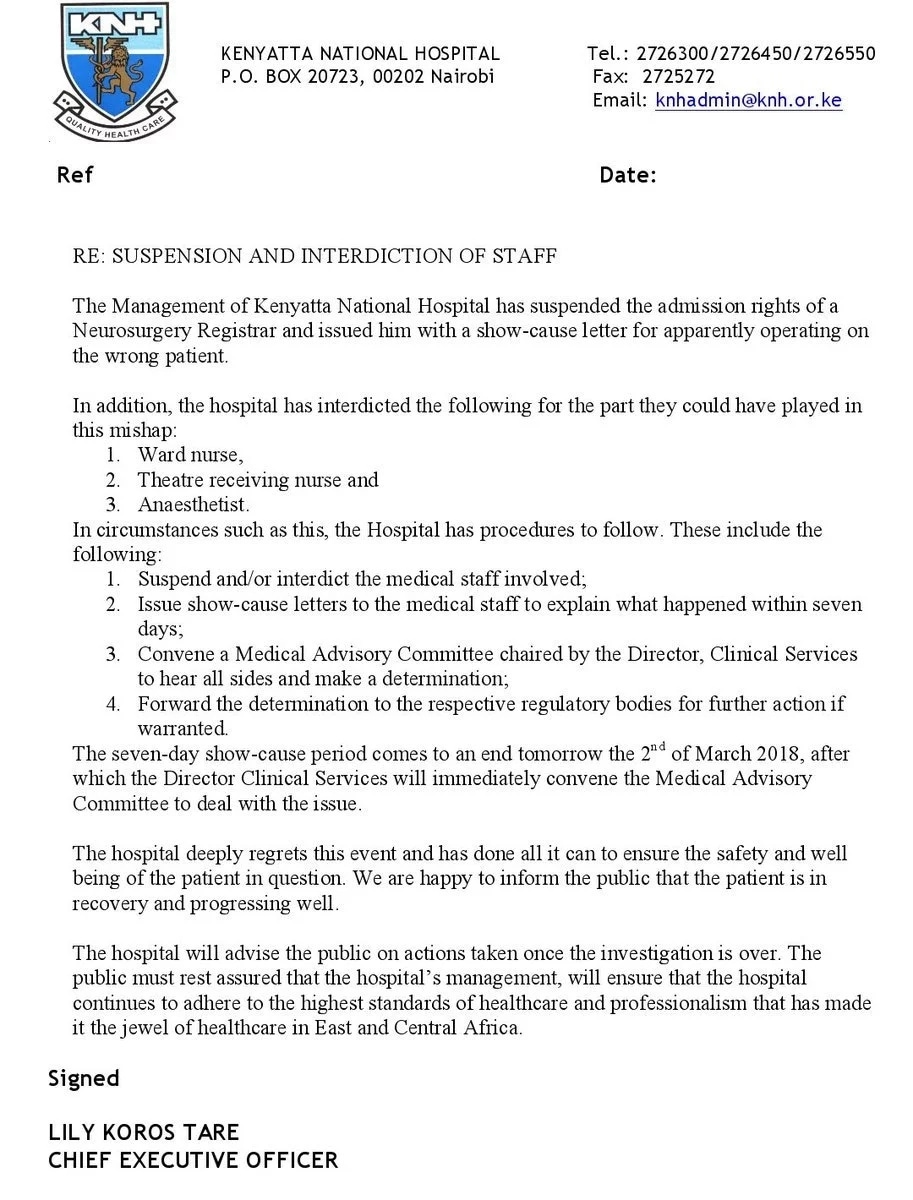 As one would expect, Kenyans quickly trooped to social media to give their views following the surgery blunder at KNH. Many were angered and amused at the same time by the embarrassing and costly debacle. A few appeared to come to the defense of the health facility arguing that such cases are not new.