President Uhuru presents his certificates to IEBC for clearance 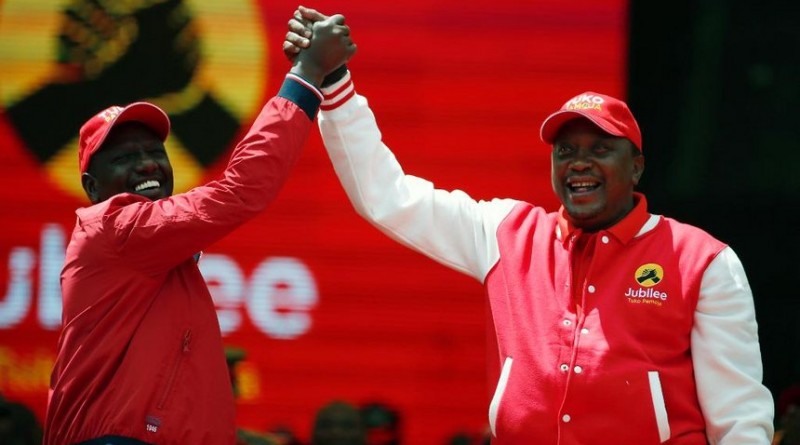 President Uhuru presents his certificates to IEBC for clearance

President Uhuru Kenyatta was this afternoon cleared to run for a second term in office after he presented his nomination papers with Deputy President William Ruto as his running mate.

The President addressed rallies at Donholm, Buruburu, Bahati, City Stadium and Muthurwa in Nairobi’s Eastlands which is home to the majority of the city’s residents.

At the rallies, President Kenyatta said he was humbly asking Kenyans to vote for him for a second term so that the Jubilee Administration can continue with the development programs it has been implementing to transform the country.

“We are not people who rely on propaganda and we do not incite Kenyans against each other. All we want is for Kenyans to be together and enjoy the prosperity of our nation,” said the President when he spoke in Donholm.

He said the Jubilee Administration has delivered on its promise to expand the country’s road networks.

He said the expansion of the road network in Eastlands will be completed soon even though it had been delayed by consideration concerning displacement of traders along the road corridor.

President Kenyatta urged Kenyans to remain peaceful during the electioneering period, adding that the Jubilee Administration stands for unity and peace.

He said Kenyans should be allowed to choose the leaders they want without being forced, calling on politicians to be civil as they seek for votes.

“We said Kenya will not progress through tribalism or incitement and our pledge has always been to unite Kenyans,” said the President.

President Kenyatta said the Jubilee Administration has delivered on its promise to expand the road coverage, make examinations free of charge, make maternity free of charge and expand connections to electricity.

“Beginning next year, we are promising that no parent will be asked to pay secondary school fees and we have already factored Sh5 billion in the new budget for that purpose,” said the President.

President Kenyatta thanked Jubilee supporters in Nairobi for choosing to be represented by a cosmopolitan team to lead the city County Government.

“Our aim has been to unite Kenyans and we want to thank Jubilee supporters in Nairobi who have chosen a cosmopolitan team to look after the interests of the city,” said the President.

Deputy President William Ruto urged the residents of the city to vote for Mike Sonko as the governor of Nairobi because he understands Nairobi’s problems more than the current governor “who reads about the problems of the city in the newspapers only and has no idea what city residents go through.”

“We urge you to vote for this young Jubilee team so that we can change Nairobi,” said the DP.

Sonko on his part said the current county government has done little since it was voted in and it has ignored the plight of those struggling to make an honest living.

“The Jua Kali sector has been ignored. There is money for constructing decent sheds for Jua Kali workers but because of corruption in the county government, those sheds are sold to them at Sh500, 000,” said Mr Sonko.

He said in his first hundred days, he would provide the sheds free of charge and also reduce the many licenses that are used to fleece money from them.

The Jubilee aspirant for Nairobi Senator Johnson Sakaja said the composition of the Nairobi Jubilee team proves that the Jubilee Party is not based on tribe.

President Uhuru presents his certificates to IEBC for clearance Reviewed by samrack on May 29, 2017 .

Share thisFacebookTwitterPinterestEmailWhatsAppPresident Uhuru presents his certificates to IEBC for clearance By PSCU President Uhuru Kenyatta was this afternoon cleared to run for a second term in office after he presented his nomination papers with Deputy President William Ruto as his running mate. The President arrived at the Kenyatta International Convention Center accompanied by thousands of