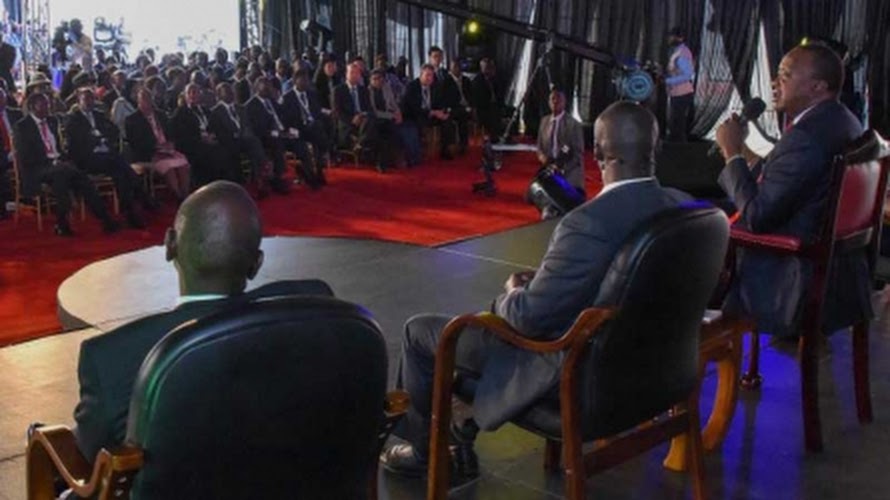 NAIROBI: President Uhuru Kenyatta has defended his record accumulation of  public debt, saying the money will eventually spur economic growth. He said Kenyans should not worry about the Sh4 trillion debt because the money has been invested in development projects across the country. “The money is not going towards payment of salaries or consumption but to projects that will spur economic growth and create employment,” Uhuru said. He was speaking Monday during the launch of the government’s delivery portal which outlines the projects it has undertaken. “When people say we have borrowed more than our country can handle, I think we need to do is also put our borrowing in context. You can’t grow an economy or a country unless you have access to resources,” the President said. According to data from the Central Bank of Kenya, President Kenyatta has doubled Kenya’s debt in just five years, increasing the debt by more than Sh2 trillion. Former President Mwai Kibaki took 10 years to accumulate Sh1.1 trillion in debt. ALSO READ: UhuRuto: Judge us by our scorecard The President dismissed his critics who have accused him of over-borrowing. Uhuru said the only reason Kenyans should be worried with the level of borrowing is if the money was used for consumption or recurrent expenditure.

He said his government has been borrowing to invest in rail, roads, water, and health, areas he said would have a positive impact on the country by enabling economic growth. Run away “I do not think we should be concerned as a country. Yes, we are not going to run away from the fact that we are borrowing. But the question is, are we borrowing for investment or for consumption?” President Kenyatta also denied claims that the borrowed funds are being misused. He said the State portal he launched Monday offers evidence on how the money was used. “There are people out there saying we have borrowed money, that we are talking about fake roads, that there are no roads being built. We want to tell you we have built and completed a road from Voi to Taveta, a road that was never there,” he said. Uhuru said those claiming that the Sh200 billion proceeds of the Eurobond had been stolen were peddling lies. “The portal will show you where the government invested the money,” said the President. ALSO READ: Former Nakumatt boss Ramamurthy takes over Bidco’s hot seat “We are here today to say that the Sh200 billion supposedly stolen from the Eurobond, where that money has actually gone,” the President said. “We want to tell you we have built a bridge from Mbita across to Rusinga that was never there. If you do not take my word for it, there it is. If you do not want to believe what is here, go to the ground and come back and tell us whether it exists,” President Kenyatta added. The President urged Kenyans to be patient like a farmer who prepares his land, sows seed, weeds, and tends his crops before he can reap. He also asked Kenyans to support his government and re-elect him in the August 8 elections.
Read more at: https://www.standardmedia.co.ke/

Share thisFacebookTwitterPinterestEmailWhatsAppPresident Uhuru Kenyatta defends Jubilee over Kenya’s Sh4 trillion debt NAIROBI: President Uhuru Kenyatta has defended his record accumulation of  public debt, saying the money will eventually spur economic growth. He said Kenyans should not worry about the Sh4 trillion debt because the money has been invested in development projects across the country. “The