Berlin Marathon winners Eliud Kipchoge (right) and Gladys Cherono of Kenya pose with their trophies and medals next to a clock displaying Kipchoge’s winning time setting a new record after the Berlin Marathon on September 16, 2018 in Berlin. PHOTO | JOHN MACDOUGALL |  AFP

Kipchoge smashed the previous world record by compatriot Dennis Kimetto by a massive one minutes and 16 seconds, clocking 2 hours, 01 minute and 39 seconds.

Cherono on the other hand, smashed her personal best and course record. From then on, social media was awash with congratulatory messages for Kipchoge.

For once, the all too familiar challenges that have dogged the country in recent times, including the high cost of fuel and living, controversial demolition of prime properties, corruption, and state of security were cast to one side. 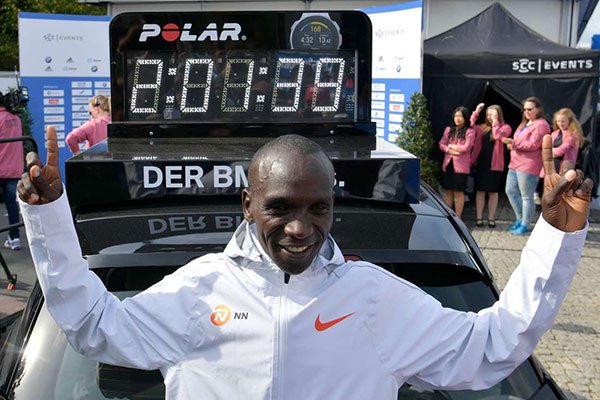 Kenya’s Eliud Kipchoge stands in front of a clock displaying his time after winning the Berlin Marathon setting a new world record with 2h01m39s on September 16, 2018 in Berlin. PHOTO | JOHN MACDOUGALL |AFP

“Congratulations @EliudKipchoge for breaking the world record at the #BerlinMarathon2018. I also congratulate his compatriots Amos Kipruto and Wilson Kipsang’ for going out valiantly to bring a 1-2-3 victory for #TeamKenya. You are our heroes. Kenya is proud of you,” President Uhuru Kenyatta on Twitter.

“You have done us all extremely proud by breaking the Men’s World Record at the Berlin marathon. Hongera Eliud Kipchoge may you continue to be an inspiration to our youth through your heroic exploits in athletics,” added opposition leader Raila Odinga.

“A show of strength, stamina, willpower as Eliud Kipchoge produces a masterclass in long-distance running to smash the Berlin marathon record. Powerful, phenomenal display from an impeccable athlete, a legend,” the DP wrote on Twitter.

“He’s getting quicker, he’s getting quicker.. He’s so composed, focusing on the road ahead of him.. Three quarters of the job is done.. It looks like the gold is in his bag.. Kimeto was impressive but Kipchoge is superhuman,” remarked the commentator of the 2018 Berlin Marathon as Eliud Kipchoge galloped past the 35km mark in a time of 1: 41: 03.

At that point Kipchoge was well within Dennis Kimetto’s world record of 2: 02:57 and it was just a question of what time he would clock. Former 1500m Olympic Champion Bernard Lagat tweeted:

“Eliud Kipchoge is a LEGEND!!!! I can’t believe I’m witnessing the greatest marathon EVER!!!!,”

Jon Mulkeen, a senior editor of the IAAF website, threw in his prediction of the new world record on Twitter as Kipchoge went past the 40km mark in a time of 1:55:32.

“At a time like this, we should all be flying the Kenyan flag from every roof top. Congratulations Eliud Kipchoge and Gladys Cherono. I am team Kenya,” said Makueni senator Mutula Kilonzo Junior.

“Congratulations @EliudKipchoge for breaking the World record in 42KM #Marathon. You have made us proud once again, this confirms that #Kenya remains a powerhouse in athletics.

#TheCityofChampions is proud of you,” Uasin Gishu Governor Jackson Mandagor, where Kipchoge hails from, tweeted.

“If you have ever ran a marathon then you know how hard it is to run under 2:02 ! And to be able to run fast marathon back to back. @EliudKipchoge is a monster congrats champ I will live to remember this day it will take a generation to see another run like that,” former Boston Marathon champion Wesley Korir added on Twitter.

Enroute to breaking this record, the thirty-three-year-old clocked two hours, one minute 39 seconds in Berlin, taking off more than a minute off the previous best incidentally set by compatriot Dennis Kimetto on the same course in 2014.

This latest triumph is certain to earn Kipchoge – considered one of the greatest marathon runners of all time – atleast Sh100 million in prize money and bonuses.

The reigning London marathon champ also has a Sh20 million worth Isuzu Dmax double-cab pick-up gift worth awaiting him when he gets back home.

This follows a partnership between the Olympic champion and truck and bus manufacturer Isuzu East Africa, which entails the athlete working as a brand ambassador of the firm.

Le Rosey!The most expensive in the world.

Le Rosey!The most expensive in the world.