President Kenyatta calls for unity in the New Year 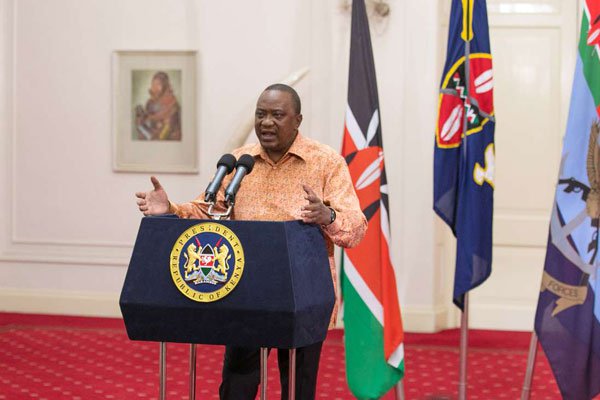 President Uhuru Kenyatta at State House, Nairobi as he delivers the New Year message to Kenyans on December 31, 2017. PHOTO | PSCU

President Kenyatta calls for unity in the New Year

President Uhuru Kenyatta  spoke out for the first time about his new Cabinet, saying he would unveil the team soon to deliver his administration’s agenda for his second and final term in office.

Speaking at State House while delivering his New Year’s message to the nation, the president said that those to be appointed must prove themselves worthy of the trust Kenyans will have bestowed on them.

“In the next few weeks, I will unveil the men and women to whom I will entrust delivery of the ‘Big Four’, and other programmes that will transform this country.  I will expect these men and women to serve Kenyans without partiality and with the very highest standard of integrity and efficiency,” President Kenyatta said in his message delivered live on TV.

The President also reached out to Kenyans, calling for unity in the New Year, while describing 2017 as having been an “extra-ordinary year.’’

He listed his achievements for the last five years, noting that his government had constructed a world-class railway line on time and within budget. He announced that  tomorrow the  railway will begin carrying commercial cargo, cutting costs and delays in trade for Kenyan business people and neighbouring countries.

He said he had delivered on this promises because he knew that to attract world-class manufacturing and value-addition investments, which are critical to creating jobs, a world-class infrastructure is needed.

“We did the same with roads, by undertaking the most aggressive expansion and upgrading effort in our nation’s history,” he said.

“Within this period, there has been rapid growth of connections to electricity, millions of Kenyan homes and public schools are now lit up,” he said.

“We promised digital learning devices.  We delivered.  In the last two years, they have brought new knowledge to hundreds of thousands of our children.  They will do even better academically now that we have reformed our exam system and raised standards in our institutions of higher learning.”

The President said his administration had delivered new and upgraded technical training institutes throughout the country and reformed the National Health Insurance Fund and the free maternal care programme has become a great success.

“We also delivered modern diagnostic equipment to every county and the long and expensive bus journeys to Nairobi to access the most modern care have become a burden of the past,” he said.

He also acknowledged security challenges, but noted that his administration has in the last five years strengthened responses towards the threats.

Terrorist now find it harder in succeeding in their evil plans, he said, because of the brave, empowered and supported security officers.

“The impact of crime in the daily lives of Kenyans has dropped in response to the sharp increase in the number of police officers whose equipment is enhanced.  There is further to go in securing Kenya and every Kenyan, but we are on an upward climb that will make our country more secure month by month,” he said.

President Kenyatta promised that his administration will continue working each and every day to ease the life of every Kenyan.  “We laid a foundation, as we promised; we will build on it to bring prosperity and dignity to every Kenyan,” he said.

He added: “We worked hard in the last five years to deliver better services, security, and in building a foundation for a more prosperous Kenya.  We have made remarkable progress; the journey continues, for there are Kenyans who worry about low incomes, the cost of food and shelter.”

In his message, Deputy President William Ruto  asked Kenyans to re-dedicate their efforts in the service of the nation and be mindful of well-being of others so as to build this nation together.

The DP hailed the public for its patience and perseverance as the country navigated uncharted waters which has left the country more experienced and stronger.

“We have negotiated 2017 through God’s enabling power, boundless mercy and love. His divine presence has meant we are a blessed nation,” he said in his new year’s message.

Mr Ruto particularly singled out the church saying that its untiring efforts and ministry to preach peace, unity, harmony which have been instrumental in holding the country together.

He also paid tribute to the country’s sportsmen and women for their exemplary performance which has helped raise the Kenyan flag higher and other patriots for their selfless acts and each other citizen for playing their part in making Kenya great.

Calls for national dialogue, tolerance and respect for the rule of law were the dominant themes in the new year’s messages delivered by church leaders on Sunday.

The clergy called on Kenyans  to hold their political leaders to account and demand that in their mobilisation promises, genuine interests are not at stake and whether methods  being promised are rational, viable and productive.

At the All Saints Cathedral, Provost Cannon Sammy Wainaina opposed calls for swearing in of Mr Raila Odinga and instead called on the Jubilee government to open up national dialogue with the National Super Alliance (Nasa) leadership for the sake of uniting the country.

“We discourage those people calling for the swearing in of Mr Odinga and those objecting to national dialogue,” he said.

He said it is only through dialogue that people can agree on the issues affecting the country.

“It is not a must when they dialogue to agree on everything, but this will calm the political temperatures and help the country transit smoothly into 2018.

He said 2017 was a year that the country was politically divided which consequently affected the economy.

The National Council of Churches of Kenya (NCCK) urged Kenyans to refuse  to be chained in endless fracases that are characterised by sloganeering and mirages that are hollow in real substance.

General Secretary Peter Karanja, NCCK urged Kenyan communities  to re-examine themselves and establish whether their political leaders are genuinely representing their interest in their political grandstanding or were merely massaging their own egos.

“We will not succeed by telling politicians to subordinate their parochial interest to the national good. It is important that the political elites temper competition with cooperation,” the Council said in a statement signed by General Secretary, Peter Karanja.

“Politicians must realise that their self-interest would be better advanced by cooperating – even with former foes – rather than grandstanding.”

He reminded Kenyans that political transformation does not require self-sacrifice from leaders and citizens but enlightened self-interest.

Cannon Karanja asked the political leadership to put the country’s dark past behind and instead commit to build a greater, peaceful and democratic nation.

He said such a country should be the one that espouses the rule of law and respects the mandate of established institutions; a country devoid of negative ethnicity and whose people are unified by the spirit and vision shared across all its generations.

“These are aspirations that can be achieved through serious commitments of each and every one of us. We cannot afford to derail these enormous and willful investments in peace and national cohesion.”

President Kenyatta calls for unity in the New Year Reviewed by samrack on December 31, 2017 .