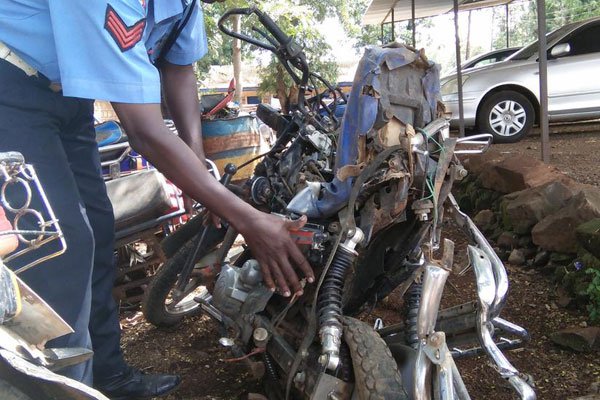 The motorcycle hit by singer Jaguar’s car in this photograph taken at Sagana Police Station in Kirinyaga. PHOTO

Popular singer Jaguar may face up to 10 years in prison if he is convicted for the deaths of two people who were hit by his car along the Sagana-Makutano road in Kirinyaga on Tuesday.

Police spokesman George Kinoti said the singer, officially known as Charles Njagua Kanyi, is being investigated for “causing death by reckless driving”, a serious charge under the Traffic Act.

The court will also have the discretion to cancel his licence if it establishes that Jaguar, an aspirant for the Starehe parliamentary seat in Nairobi is at fault.

“The investigation file is almost complete. The car underwent inspection on Wednesday and was released to the owner. Initial indications are that the motorcylist was hit from behind. He will be taken to court any time,” Mr Kinoti added.

Mr Sinfonia Mugo and Mr Joseph Maingi died on the spot at Rukanga shopping centre where the accident occurred.

There is a controversy on the circumstances surrounding the accident after witnesses claimed that the black Range Rover was being driven by a woman at the time of the accident.

In an interview with the Nation on Thursday, the singer dismissed the claim, saying although he was in the company of two people in the vehicle, he was the one driving.

The witnesses claimed a woman whose identity is yet unknown, was driving at the time, but switched seats with Jaguar after the accident.

Police had to intervene to stop some angry residents who wanted to set ablaze the vehicle after the accident.

According to Mr Peter Mwangi, the father of one of the victims, the black Range Rover was being driven by a woman when it hit the motorcycle from behind. The motorbike was carrying two people. Ms Beatrice Wairimu, the mother of the second victim, 25 year-old Joseph Maingi, backed Mr Mwangi’s testament.

“Immediately the Range Rover hit the motorbike, there was a loud bang before the vehicle swerved off the road and later came to a halt. From the windscreen of the vehicle, I saw a lady on the wheel exchanging the seat with a man. After they did that, the man came out of the car from the right side while the lady did so from the left,” said a witness, one of the workers repairing the road, but who did not want to be named.

On Thursday, when the Nation visited Sagana Police station, the black Range Rover (KCB 808J) was not at the station. Mwea West OCPD Samuel Seurey said they had released it to Jaguar, known for his hit song Kigeugeu.

“We gathered all evidence we could and released the vehicle to the owner,” said the police boss.

On his Facebook page, the singer admitted he was involved in the accident but denied claims of a cover-up.

“It is not anyone’s will to wake up and be involved in an accident such as this. My heartfelt condolences to the families. I would like to assure all concerned that due process of the law is being followed to amicably resolve this. Let us avoid confrontational remarks in consideration to the pain it is causing the bereaved families,” wrote Jaguar.

He said he was driving along the highway, when the motorcyclist tried to cross the road.

“I tried my best to stop, but it was too close. The car hit the two and we all veered off the road. It was an unfortunate incident,” he said.

Sagana police also said they had no information that the vehicle was being driven by a woman at the time of the accident, saying no witness had recorded statements about the seat switch.

“The information we have is that the musician was driving at the time. We are also aware of the claims that someone else was driving but we have no official witness statement backing that. But investigations are under way,” said Mr Seurey.

Jaguar resigned recently as a director of the National Authority for the Campaign Against Alcohol and Drug Abuse (Nacada), to campaign for the Starehe seat.

Postmortem exams on the two bodies will be conducted today at Kibugi Funeral Home, where they were taken after the accident.

Popular singer Jaguar may face up to 10 years in prison Reviewed by samrack on March 23, 2017 .