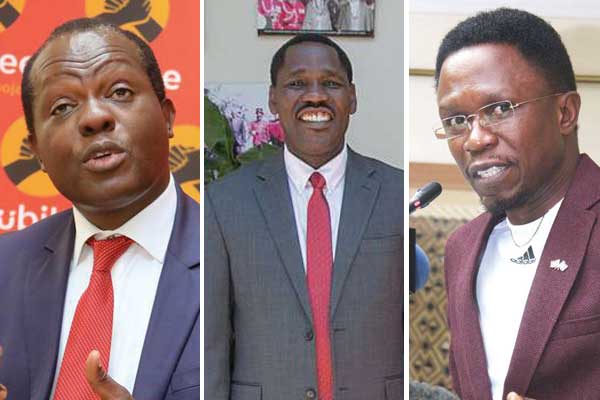 President Uhuru Kenyatta and his deputy William Ruto are expected to bring more politicians into the Cabinet in major changes insiders say are about to be unveiled.

In 2013, the two wanted a Cabinet of technocrats and had said the only politicians in it would be the two of them.

But political realities and the failure of cabinet secretaries and principal secretaries to adequately explain to the public the projects their ministries were implementing have forced a rethink.

Senior government sources said the CSs and PSs did “not shout loudly” about the work the government was doing.

This was a particularly serious shortcoming because Jubilee Party wanted to run a delivery campaign, where they sought re-election on the basis of their 2013 pledges.

However, the bulk of project visibility came from the work of presidency mandarins working in the background and less from mainline ministries.

Secondly, protracted electioneering forced the President and his deputy to cut political deals in order to win the election and now there is a queue of politicians waiting to collect.

However, State House Spokesman Manoah Esipisu said he will not be drawn into discussing when the President will announce the Cabinet.

“When the President is ready, I am sure he will announce; for now, I can’t speculate,” said Mr Esipisu.

The President is expected to travel to Nakuru County to preside over Thursday’s cadets passing-out parade at the Kenya Military Academy at Lanet, his first official duty since he took the oath of office for a second term on Tuesday.

Sources said on Tuesday evening, after guests had left the State Luncheon, the President and Mr Ruto spent several hours in a closed-door meeting into which no one else was allowed.

While politicians in the Cabinet are seen as the key to the President retiring with a development and service delivery legacy, they are also seen as very key to the chances of Mr Ruto succeeding his boss in 2022.

It was also revealed Wednesday that the President and Mr Ruto have been appraising CSs.

The sources said the President will especially focus on the Ministry of Industrialisation, held by Mr Aden Mohamed, to ensure the docket delivers job creation, increases its contribution to the Gross National Product from the current 9 per cent to 15 per cent, making export processing zones more competitive and playing leading role in import substitution.

“Does the President feel that the people currently holding this docket can deliver or who is best suited to deliver his expectation from the ministry?” posed a government source.

From President Kenyatta’s acceptance speech at the Kasarani stadium, it was clear that the Health ministry will be a focal point.

He wants to attain his promise of affordable healthcare through the National Health Insurance Fund (NHIF) and it is this docket, now led by Dr Cleopa Mailu, to deliver.

The sources said they thought the President wants a CS who will put to an end the crippling strikes in the health sector. Nurses, doctors and other medical professionals have gone on long salary strikes over the past three years.

Education and Interior ministries will also be given priority. That President Kenyatta is determined to implement Free Day Secondary Education (FDSE) is evidenced by the expected first full transition of 2017 KCPE candidates to high school.

Secondly, restoration of quality education in primary, secondary and higher institutions of learning is a priority and Dr Matiang’i is seen as having done an exemplary job after replacing Prof Jacob Kaimenyi in 2015.

Dr Matiang’i approached the Interior docket with the same ruthless focus and delivery during the election crisis.

The question is whether the President will retain him in Education or confirm him as a substantive Interior CS.

The names of Kenya National Examinations Council chairman and former University of Nairobi vice-chancellor, Prof George Magoha, and former Nakuru Governor Kinuthia Mbugua, a former Administration Police commandant who is now based at State House, are being mentioned.

More complex in the delivery of political promises is how the President deals with his presidential agent, Mr Davis Chirchir, a sharp operator in the corridors of power.

The sources said he negotiated a top government appointment before agreeing to be the Jubilee presidential agent.

He worked at the IEBC before being appointed Energy CS, where he was purged on graft allegations but cleared by the courts.

Mr Chirchir is being mentioned in relation to a senior State House position.

That would be either the President’s Chief of Staff and Head of Public Service, currently held by Mr Joseph Kinyua, who is said to be retiring, or Secretary to the Cabinet, most recently held by Nyandarua Governor Francis Kimemia but vacant since he was edged out.

The debate now is what message the President would be sending by appointing as his principal aide a person generally seen as having had a chequered service.

Equally, questions are being asked as to whether it is smart politics to bring into his domain an official who orbits in the constellation of his deputy and presumed successor as this could put him in an early lame duck status with attention and power shifting to the man on the make.

Sources hinted at a split of the Energy ministry to create a new Petroleum ministry, with the name of Petroleum PS Andrew Kamau mentioned.

With the country facing a serious crisis of balancing its budget, mining is seen as a new source of revenue and Mining CS Dan Kazungu may find himself in a shaky position.

Mr Ali Wario of Sports, having overseen the Rio de Janeiro Olympic Games debacle and also failing to deliver on the much-touted five stadiums, is also facing a difficult period ahead.

Politicians back as Uhuru drafts second Cabinet Reviewed by samrack on November 30, 2017 .

Share thisFacebookTwitterPinterestEmailWhatsAppPoliticians back as Uhuru drafts second Cabinet President Uhuru Kenyatta and his deputy William Ruto are expected to bring more politicians into the Cabinet in major changes insiders say are about to be unveiled. In 2013, the two wanted a Cabinet of technocrats and had said the only politicians in it would be the