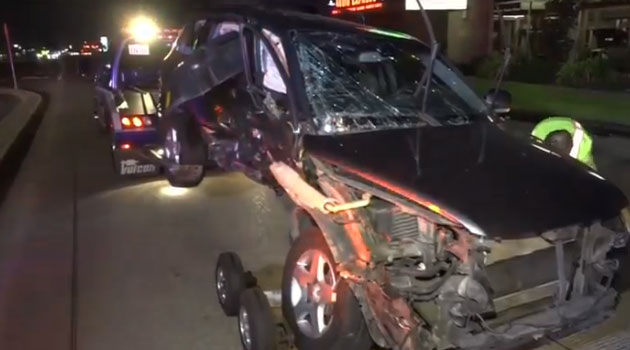 A man accused of driving drunk and killing the driver of another car appeared in court Sunday afternoon. Martin Kingori, 36, faces a murder charge and is also in trouble for having his 4-year-old daughter sitting in the passenger seat of his SUV without a seat belt.

The passenger side of Kingori’s SUV was hit in the crash and badly mangled. “Miraculously, the child suffered minor injuries and was transported to Northwest Hospital,” Sgt. S. Wolverton, with the Harris County Sheriff’s Office, said. Kingori was driving a gray Volkswagen Touareg westbound on F.M. 1960 near Kuykendahl Road at about 1:30 a.m., according to the Harris County Sheriff’s Office.

Kingori is charged with causing the death of a Hispanic male when he attempted to U-turn in the middle of the road at about 2am on Sunday/COURTESY ABC NEWS Police: Kenyan Drunk driver charged after deadly wreck in northwest Harris County SEE VIDEO LINK A man accused of driving drunk and killing the driver of