Playful designer strikes : At home in Kenya with Mwangis former US residents

The Mwangis moved into their home about six years ago after relocating from the US where both her and her husband worked after completing their studies.

Playful designer strikes : At home in Kenya with Mwangis former US residents

This house beautifully rests in the cold areas of Matasia, Ngong town; it is no wonder that the Mwangis are not afraid of colour. More especially, warm mixes of browns, orange and even reds. Their house is fairly big for a four bedroomed house, and it sits in a compound just as large.

In true Kenyan fashion, they have divided their space into two; on one side they have a small farm, and on the next have done some pretty landscaping, complete with a barbecue grill and sitting area covered by a parasol.

This, Florence says, is all her husband’s doing. But she takes all the credit for the interior, and she is proud of it. The Mwangis moved into their home about six years ago after relocating from the US where both her and her husband worked after completing their studies.

“Only the ‘shell’ was complete,” Florence says. “The walls didn’t even have plaster. I have painted and repainted some rooms, as well as put tiles and removed them when I discovered that they were not good for the cold here in Ngong.”

This homeowner is not afraid to give it a shot over and over, to realise her desired home 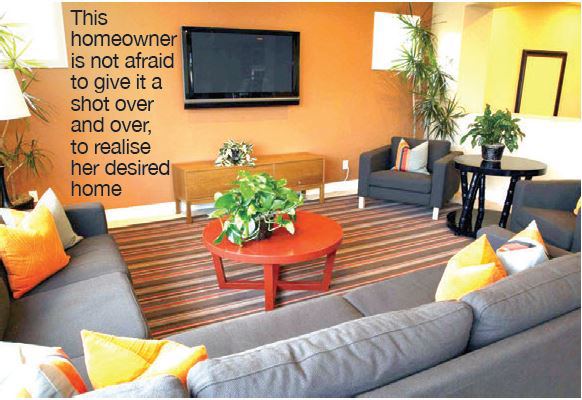 Her living room furniture is the only thing that she says will be a constant because she imported it from their house in the States when they moved back home.

“At that time I could not find a couch that satisfied the look I wanted that wasn’t expensive and I didn’t trust a carpenter to make a good quality one.

However, it ended up costing us that money we were trying to save and nowadays, I feel silly when I see similar designs in many houses!” she explains.

The rug was also an import from US. Like in the sitting room, potted plants are placed in strategic points of the rooms. 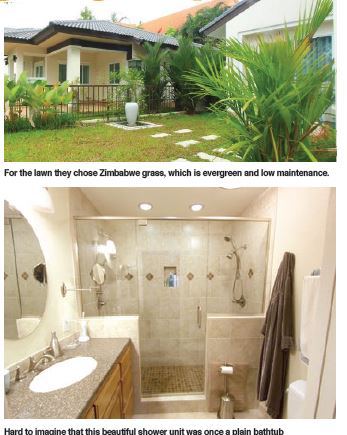 Florence attributes this to her mother’s love for aesthetics that rubbed onto her back in the day that she cannot shake off. They recently redid their master bathroom and are planning to do the same for the other bathroom in the house.

Before, there was a bathtub and shower curtains, but they uprooted it and put in a glass shower unit. She used the left over tiles from her previous failed project and added some of a similar design.

“I couldn’t find similar tiles so there are two designs in the bathroom, but all are close to a coffee colour. Luckily, it looks deliberate,” she says.