by samrack
in Africa, Diaspora, Kenya, Kenya Diaspora News, U.S Diaspora
A A
0

Plans to introduce air transport connections between Kenya and Jamaica were part of the key talks during President Uhuru Kenyatta’s visit to Jamaica.

Uhuru, who is on a three-day official visit to the Carribean country, said encouraging more trade and deepening commercial ties will strengthen the partnership between the two nations

Uhuru Kenyatta spoke upon landing in Kingston where he was welcomed by Jamaican Prime Minister Andrew Holness.

Uhuru said that flights from the East Coast of Africa to Jamaica will help strengthen economic ties between Caribbean countries and the African continent.

“Our national carrier now has scheduled direct flights from Nairobi to New York but we would like to see flights flying from the East Coast to the West Coast of Africa and directly to Jamaica, and through Jamaica to the rest of the Caribbean as a true way of deepening our partnership,” President Uhuru said.

The two leaders said air transport between Kenya and the Caribbean will lead to more economic interaction which will, in turn, help economic growth for the people of both countries.

During the meeting plans to introduce air transport connections between Kenya and Jamaica were discussed, with President Kenyatta noting that encouraging more trade and deepening commercial ties will strengthen the partnership between the two nations | #KenyaJamaicaRelations pic.twitter.com/9C1BObyAfZ

The two also signed four agreements among them MoUs on technical cooperation in tourism and in the fields of sports.

They also signed an MoU on a framework of cooperation between the two governments and an MoU on political consultations.

“We need to deepen our trade because by so doing we also take our people-to-people relations to the next level. Kenya is today one of the largest and one of the most diversified economies on the African continent,” Uhuru said.

The two leaders also discussed ways of strengthening cooperation between Kenya and Jamaica in the blue economy which they said holds tremendous potential for wealth and job creation.They also said both countries will cooperate in sports development especially in athletics, a sport in which the two counties are global icons with Kenya leading in medium and long distances while Jamaica being a perennial global record-setter in short distance running.

Holness said Kenya and Jamaica have had strong ties from the days of Marcus Garvey whose teachings of African unity had a strong impact on Kenya’s push for independence from the British rule in the 1960’s.

Uhuru is the chief guest at the 57th Jamaica Independence Day which will be held on Tuesday.

He will also the chief guest at the 67th Denbigh Agricultural, Industrial and Food Show in Clarendon.

The President said Kenya is a strong supporter of the South-South Cooperation arrangements within the African Caribbean Pacific (ACP) states. 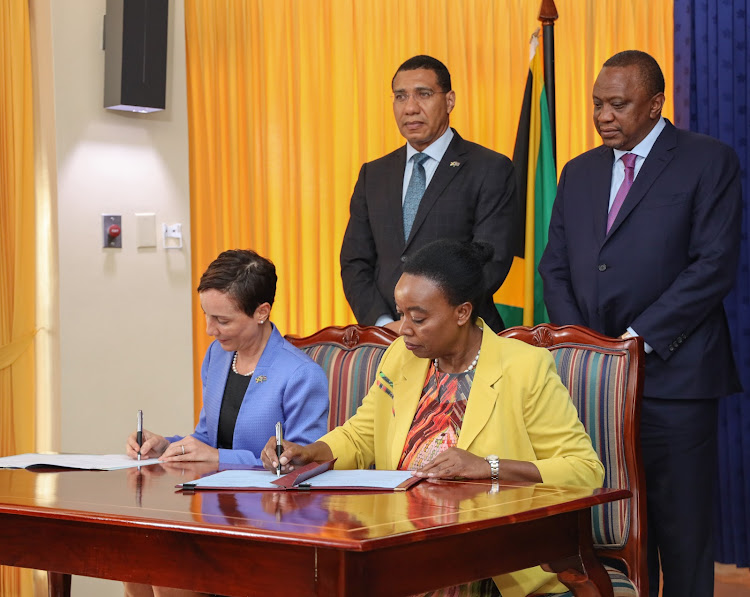 He assured his host that Kenya will continue pushing for the conclusion of a successor agreement ahead of the expiry of the Cotonou Agreement in February of next year.

Kenya will host the next ACP summit at the end of the year at which time PM Holness is expected to visit Kenya.

Kenyan minister who drunk and blacked out, shaming the President

Kenyan minister who drunk and blacked out, shaming the President