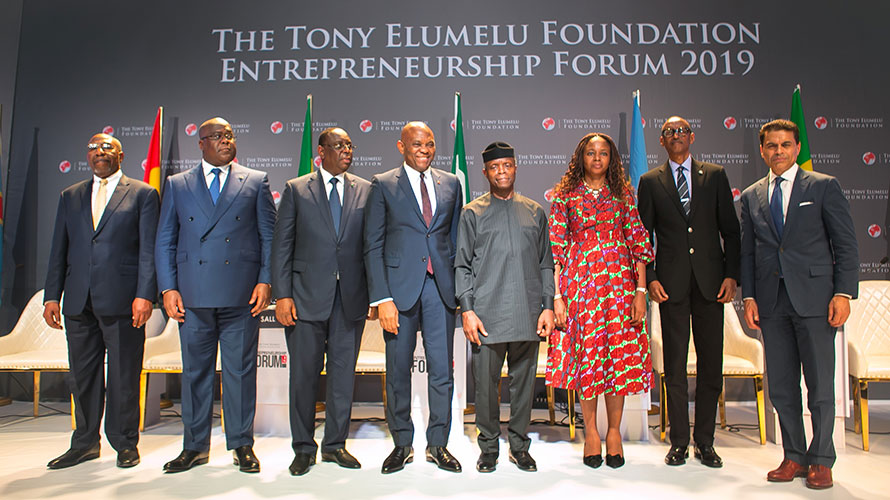 The number of Kenyans who will benefit from the Tony Elumelu Foundation (TEF) Entrepreneurship Forum has gone up to 113 from 74 last year, the foundation announced last week in an event held in Abuja, Nigeria.

The entrepreneurs who are among 3,000 selected from across 54 African countries will receive $5000 (Sh500,000) in seed capital for their ventures and training.

The Nigerian billionaire and philanthropist started the TEF in 2015 to invest in young people on the African continent and spur economic growth. The Abuja forum was the fifth edition.

Overall, the foundation received about 216,000 applications this year. Around 10,170 applications made it to the evaluation stage from which the 3,050 winners were selected.

Startups in the agriculture sector benefited the most with 26.4 percent getting the funding. The fashion sector was second with 13.6 percent followed by retail at 9.1 percent.

Healthcare, identified at the forum as pivotal to the continent’s growth, was represented by only 3.8 percent.

Since the forum was started five years ago, 7,521 beneficiaries have received seed capital of $5,000 each and have access to mentoring and training.

“Extremism is a product of poverty and joblessness. Poverty anywhere is a threat to everyone everywhere,” said Mr Elemelu, who urged governments to put in place policies that would increase partnerships with the private sector to solve problems such as unemployment the continent faces.

“If our leaders understand the reason and rationale for our youths to succeed, they will do everything they can to support them,” Mr Elemelu said.

His sentiments were echoed by the President of African Development Bank Akinwumi Adesina.

“African governments should shift from youth empowerment to youth investment. Lenders should start seeing young people as an asset and not a liability,” Mr Adesina said.

Most of the applications came from the sub-Saharan Africa region. Only 27 startups from Northern Africa were selected for the funding.

Speaking to journalists after the forum, the chief executive of the foundation Ifeyinwa Ogochukwu said as from next year they will involve more partners in the region to increase applications.

The Western Africa region was leading with 1,758 startups winning the competition followed by Eastern Africa with 773.

Southern and Central Africa regions got 346 and 146 beneficiaries respectively.

Giving a keynote speech at the forum, Vice President of Nigeria Yemi Osinbajo commended Mr Elemelu for the effort he was making in uplifting young entrepreneurs “who struggle to realise their dreams”.

“By birthing this particular intervention, Tony Elumelu has compelled us to focus on what really matters, our youth and their dreams. The message to Africa’s emerging business giants is a clear one: How and what can you contribute, like Tony Elumelu,” he said.

Ms Ogochukwu also committed to supporting the winners even into the next stage of business by helping them secure more funds from investors around the globe who are looking for good ideas to put their money.

Also unveiled during this year’s event was UBA-backed UBA Marketplace which will be a platform for the continent’s budding entrepreneurs to market their products and services.

Entrepreneurs from across 20 countries including some from Kenya got an opportunity to showcase and sell their products and services to visitors who were in attendance.

UBA Marketplace advertisement billboard on a street in Lagos

Most startups on the continent grapple with ready market for their ideas. It is the home of UBA and the foundation to aid Africans with excellent ideas connect and have ready access to sellers.

About 12 million young people join the labour market every year but only 3 million manage to secure one, Mr Adesina revealed during one of the plenary sessions.

Initiatives such as the UBA Marketplace will ensure that startups sustain themselves and create more opportunities to eradicate poverty.

Most startups on the continent grapple with ready market for their ideas.

113 Kenyan startups to get funding, training under Elumelu plan Reviewed by samrack on August 5, 2019 .