No soil was thrown into the graves after the coffins were lowered.

by samrack
in News, Obituary
A A
0

The burial of the late Dr James Gakara and his two children in Mbaruk Gilgil Sub-County, on September 28, 2021. Image: BEN NDONGA

[PHOTOS] Nakuru doctor Gakara and his two children buried:No soil was thrown into the graves after the coffins were lowered.

The actual cause if death for the three is yet to be established as postmortem examinations were inconclusive. 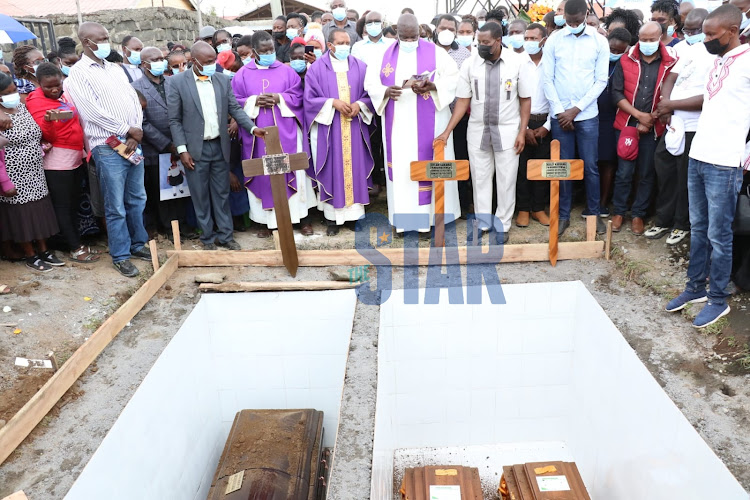 • Samples were taken to the Government Chemist for toxicology analysis.
The Nakuru doctor who was suspected to have killed his two children before trying to commit suicide- before later dying in hospital – was buried on Tuesday.

James Gakara was interred in one grave, while his two children, Dylan, 5, and Karuana, 3, shared a grave at their family home in Muririchwa area of Mbaruk in Gilgil subcounty.

A family friend said initially, there were plans to bury all three bodies in one grave, but they opted for two to reduce the size of the slab.
No soil was thrown into the graves after the coffins were lowered.

He said the family agreed that the cemented graves with tiles would not be filled up with soil. They would be left hollow and covered with a slab.

Family members, friends and relatives gathered at an open field for the burial service before a private internment at the home.

Speaking during the burial, his widwo, Winnie Odhiambo, eulogised Gakara as a resilient man with “the most beautiful soul”. 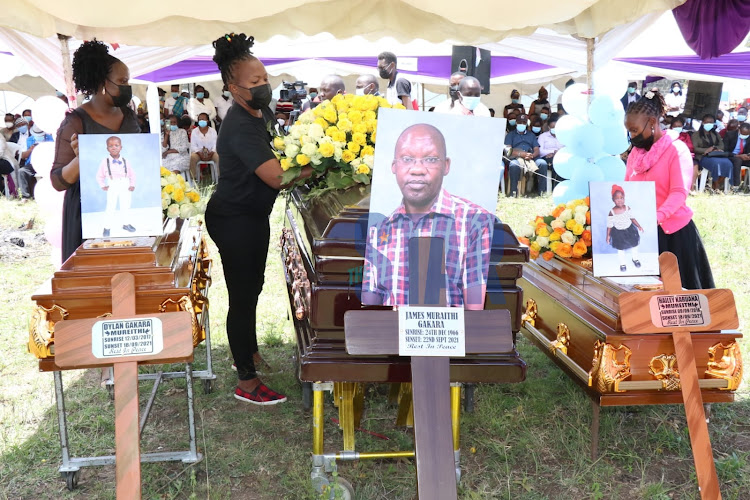 She retold two of her children’s favourite stories – The donkey in a well – which was constantly read by Gakara and – the big bad wolfand three little piglets.
Gakara’s elder daughter from a previous marriage, Agnes Njeri, said Gakara was her father, mentor and friend wrapped in one.

“My father ensured I got the best education, I am grateful for his presence and no matter what happens, he will remain my friend,” she said.
To her siblings Dylan and Karuana, Njeri said she enjoyed their time together and they will forever remain in her heart.
Gakara is suspected to have injected his children with drugs on September 18 at their Milimani apartment.

He then used the drugs on himself and was found unconscious by police who broke into the house.

However, he succumbed on September 22 while undergoing treatment at hospital.

Gakara’s mentor, Dr Norman Njogu, remembered him as his guided him through his career.

“If I was asked what I would have wanted from Gakara I would have chosen his hands because he walked with absolute finesse,” said Njogu.

Njogu added that despite Gakara being among the best obstetrician gynecologists, he chose him (Njogu) to deliver his two children.

“I knew Dylan and Hailey when they were in their mothers’ womb,” he said.

Njogu said after each baby was delivered, Gakara organised a party and gifted the team that handled his wife’s delivery with goats.

The actual cause if death for the three is yet to be established after Government Pathologist, Titus Ngulungu said the postmortem examinations were inconclusive.

Samples were taken to the Government Chemist for toxicology analysis.