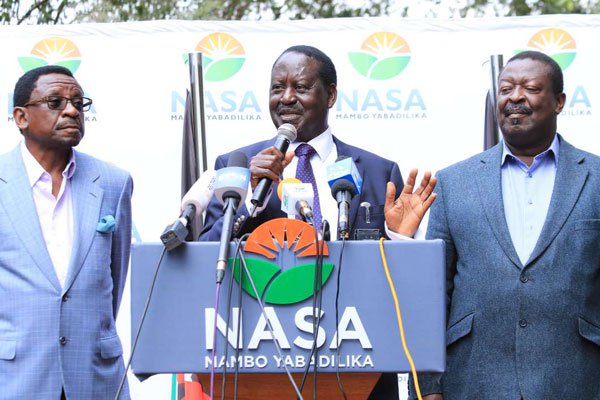 In this interactive series, we invite our readers to send in questions to select public figures. Answers will be published in the next print and online editions. This week, Senator James Orengo responds to your questions.

Do you personally feel convinced that the evidence Nasa presented in court had the weight and threshold to grant annulment of the presidential election?

Certainly. We gathered within record time massive and substantial evidence. The legal team was convinced the case was won even before it was filed. The threshold attained was beyond preponderance of evidence.

You are a firebrand politician-lawyer who, for a long time, has been a thorn in the flesh of most of the regimes Kenya has had since independence. You have been an MP, Senator and a Cabinet minister but I don’t think there is any tangible development that the people of Ugenya, Siaya, and generally Kenyans can associate with you in your public life. Why do you offer pro-bono legal services on very divisive and dangerous issues in this country like it does not matter to you?

As a Cabinet minister, I created land registries in modern buildings in Siaya, Bondo and Ukwala. New districts were created, health centres built and modernised.

I accomplished a lot in the education sector, infrastructure development and supply of electricity.

Then there was the democracy and human rights projects that removed political tyranny and brought about the birth of the new Constitution.

I represented many Kenyans from across the country without discrimination. I stood firm with Kibaki against Moi when few lawyers would act for him against Kanu, and acted for Uhuru when Kibaki wanted to take Kanu away from him and Ruto and give it to Biwott.

I have always found myself defending the underdog. But I find it odd to talk about myself in these terms. I would rather not.

To your admirers, you are a “walking Constitution” while, on the other hand, your critics see you as an unnecessary irritant. What is your take on these extreme positions? How do you reconcile them to live a normal, ordinary life?

Maybe this is a function of dialectics and existentialism.

In time and space nature is engaged in an endless universal struggle and a spate of contradictions that ultimately build the apparent cosmic harmony and order.

A component of it is the struggle between Man and Nature and Man and Man. I do not want a lifeless life.

Sir, as a paragon of law in the country, do you often represent the common man just for the sake of it or are you politically positioning yourself to be Raila Odinga’s heir when he retires?

I am just a conviction politician, if you will. There is no real estate in politics. I, therefore, cannot be an heir.

You led a successful petition against the recently concluded elections. My question is, in case Nasa presidential candidate loses in the upcoming repeat election, will you again go to the Supreme Court to challenge the outcome?

Nasa is preparing for an election that is free and fair. In those circumstances, one can live with the outcome of the fresh presidential election. But Nasa is intolerant to injustice and electoral fraud.

Sir, comparing the situation in our universities today and your time, it would seem a lot of water has passed under the bridge so to speak. What is your take on this and what do you think has resulted in this negative outcome?

Universities were places of honour and academic distinction. Many important debates were held at the campuses in Dar, Makerere and Nairobi.

Then hell broke loose when the Moi state invaded the universities in an attempt to turn them into appendages of the monolithic political system and launched a systemic assault on academic freedom.

But the university communities fought back.

But the path to honour and distinction is still narrow and difficult to tread for academicians and students alike.

Higher learning and research require more resources and investment and a conducive and enabling environment.

You have participated in various fronts as an activist at the University of Nairobi during your study days, a participant at the country’s Second Liberation struggle, a lawyer and now an active politician. Of these phases, which one have you enjoyed most and why? Which one have you been most disappointed with and why?

It has all been a journey. The first step in the journey was as important as the subsequent steps.

It has been a life of struggle and I have relished every moment.

The proclamation of the Constitution of Kenya on August 27, 2010 was probably the zenith.

I regret the fact that the successes of the struggle and the reform movement have constantly been hijacked by the forces of reaction and status quo.

The landmark ruling of the Supreme Court of Kenya invalidating the presidential result has caused a major political and legal earthquake in the country and beyond. Having been the lead counsel for Nasa, which won the petition, how do you feel and what was your secret behind this historic and momentous breakthrough?

It was a happy day. It confirmed the supremacy of the Constitution. It was hard work.

We had a professional, experienced and dedicated team of lawyers, researchers, statisticians, ICT and forensic experts.

And again, in this one, Pheroze Nowrojee was with me.

Without a doubt, you are one of the finest, most brilliant lawyers in the country. Given the landmark ruling by the Supreme Court, which invalidated the presidential results, do you feel like it is now mission accomplished for you professionally? Do you intend to write a book after this landmark success?

I take the compliments with humility. I do not intend to down my tools. A book is certainly coming. But it is not round the corner yet.

Congratulations on your successful litigation before the Supreme Court. What is your opinion on the culture of castigating judges in the public more so when they make rulings that seem to rattle the political top brass? Don’t you feel, for instance, President Uhuru Kenyatta’s reaction to the determination was an infringement of Article 160(1) that guarantees independence of the Judiciary?

That culture was prevalent during the Moi era.

It led to the removal of the constitutional protection and security of tenure of the judges and the independent exercise of the judicial authority by the courts.

Like the French say plus ça change, plus c’est la même chose (the more things change, the more they stay the same).

It is unbelievable that the President would undermine the judicial authority of the courts instead of defending it as he is under duty to do so under the Constitution.

I am a diehard supporter of Nasa and I express my gratitude for the legal battle you courageously fought in the Supreme Court. Given the threats of impeachment by none other than the incumbent president, how would Nasa survive such a motion since majority are from the opposite side?

President Obama served his second term without a majority in both houses of Congress and there was no single threat of impeachment.

President Nixon was forced to resign when the rod of impeachment was hurled at him despite having a majority in both Houses.

President Kenyatta had a Freudian slip caused by the national popularity of Raila Odinga and the inevitability of his victory glaring at the President’s face.

After the declaration of the August 8 General Election results, many politicians in your camp (Nasa) started the secession talk. What is your take on this? Will it help achieve your aspirations as a coalition?

The secession talk emerged from a compelling feeling of exclusion of a big section of the populace.

It should not be ignored because a recital in the pre-amble of the Constitution of Kenya behoves us to live in peace and unity as one indivisible sovereign natio,n which is proud of its ethnic, cultural and religious diversity.

Kenyans want the wall of tribal hegemony and the domination of a kleptocratic and felonious state brought down.

Recently during one of the campaign rallies, Nasa presidential flagbearer Raila asked President Uhuru Kenyatta to quit the presidential race scheduled for October 17. What is the rationale of this appeal yet the Supreme Court’s order was a repeat of the presidential election? Are there emerging issues that warranted this?

President Uhuru Kenyatta’s utterance has manifested his frustration with the Constitution, the law and the independent and separate arms of government.

He has the manners and appetite of a monarch, a prince or an absolute sovereign.

But even a temporal power needs special or natural gifts and talents, some of them as crude as the theories Machiavelli propounded.

Uhuru is asphyxiated by life in a constitutional multi-party democracy. He would rather live and rule outside it.

In 2002, you unsuccessfully vied for the presidency. Question is, do you still harbour those ambitions?

In 2002 with some of my friends, we felt that the progressive movement had been stifled, and that the revolution had been hijacked.

My candidature did not target the presidency but rather it sought to find some space, however small, for the politics of human rights and social justice to be in the political discourse during the campaigns.

Indeed subsequently the Moi state was resurrected in the Kibaki and Uhuru regimes.

But we have kept the narrative of reform and hope alive.

Sir, if the IEBC fails to conduct an election within 60 days as ordered by the Supreme Court, would that give rise to a constitutional crisis? What would happen in such a hypothetical scenario?

All systems must be put in place to ensure that an election is held within 60 days.

It is not an order of the Supreme Court. It is the dictate of Article 140(3) of the Constitution of Kenya.

There is definitely a fault line in the Constitution in circumstances in which an election cannot be held within the stipulated period.

I however firmly believe that, with utmost fidelity to constitutional principles, innovative mechanisms can still be contrived to deal with any crisis while remaining faithful to the rule of law and constitutionalism.