OPEN FORUM WITH REV. DR. TIMOTHY NJOYA: THE STATE OF THE KENYAN NATION 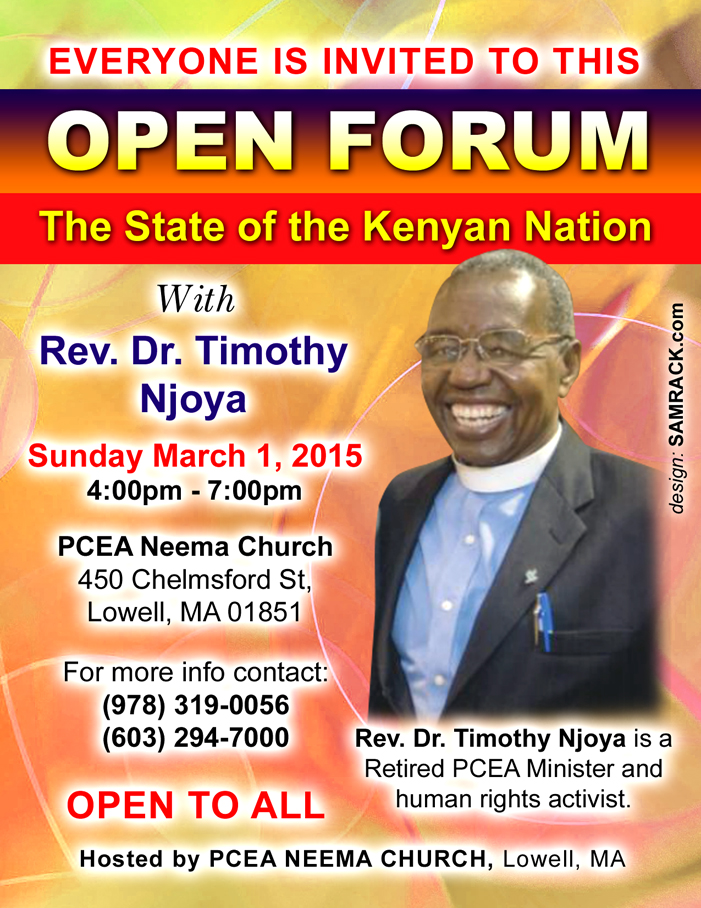 Open Forum with Rev. Dr. Timothy Njoya: The State of the Kenyan Nation

A renowned Reverend, Timothy Njoya was cornered and brutally beaten by Kenyan riot police during demonstrations for a new constitution. Clearly the police went way overboard!

An advocate for change and justice, a tireless voice for gender equity, and a devoted Christian, Dr. Timothy Njoya is one of the most influential and active advocates for human rights in Kenya. For more than two decades, he has been fearlessly challenging the corruption and violence within Kenyan politics, demanding multi-party elections since former President Moi’s regime.

Faced with strong and often intimidating resistance from the Kenyan government, Njoya has been detained without trial and survived brutal beatings for his outspoken opposition to government policies. “I have planted a seed: the seed of dignity, respect and equality. I have, over the years, watered this seed with my own blood, so it can grow and spread”.

He considers himself to be a “mother of change,” and he recognizes that birthing this change is not always easy, nor is it always peaceful or painless. “I am not a victim. I accept the harm done to me because my struggle has produced the fruit of change in my country.” His courage and perseverance in the face of adversity is an inspiring testament to his passion for not only the people of Kenya, but for the basic rights and freedoms meant for every individual around the world.

Dr. Njoya is also an enthusiastic proponent for women’s rights and in 1999 founded the Men for Equality with Women (MEW) lobby group, dedicated to informing men on gender issues and encouraging them to respect the rights of women. MEW recently published its first book, “The Crisis of Explosive Masculinity”, which gives light to the gender inequalities that are so pervasive in Kenya and elsewhere in the world today. Dr. Njoya explains, “In Kenya, women are expected to carry the heavy burden of providing for the family while the men, for the most part, sit idle. MEW works to teach men to lend a greater hand in daily tasks and activities; whether it be cooking, cleaning, or farming, so that they may have a greater appreciation and respect for the women in their lives.” Njoya and the Men for Equality with Women group work to define masculinity in the context of human rights, and more specifically, in the context of women’s and children’s rights.

In 2000, Dr. Njoya was awarded the prestigious John Humphrey Freedom Award for his continued struggle for peace, justice, and equality in Kenya. International acclaim has given Njoya the opportunity to challenge other governments and international organizations—namely the International Monetary Fund and the World Bank—to fight for the protection of human rights around the world by refusing to send monetary aid to corrupt regimes.

Although he is internationally known for his human rights work in Kenya and abroad, Dr. Njoya recognizes that his success is not his own. “I do everything for the glory of God where both credit for success and responsibility for failure belongs to God.” In 1956, Njoya was ordained by the Presbyterian Church of East Africa, and he now leads the largest Presbyterian congregation in Nairobi. “The relationship between my faith and my political activism is like the relationship between heat and fire.  The more the heat the more the fire burns.” It is his faith that inspires him to greater love and compassion, and is best seen through his continued efforts to encourage and lead his congregation in the struggle for peace and democracy in his country.

Following the recent violence that ensued from the December 2007 presidential elections in Kenya, Rev. Njoya called for peace and patience in the midst of political instability and uncertainty. “The life, faith, and hope that came to the disciples after Jesus’ death and resurrection is an example of the way to go. There is great hope for Kenya even after its most hallowed ‘Messianic’ institutions, including the Electoral Commission, have proven to be not what we expected of them… a nation that puts too much confidence in its politicians may jeopardize its capacity to out-survive them. Jesus wanted the faith and unity of his disciples to outlive his physical presence. Each genuine leader, even if he were to be crucified, should wish the same for his nation.” Dr. Njoya’s great faith in Kenya’s future is reflective of his faith in the people of Kenya and their ability to remain unified in their determination to fight for a truly democratic nation, where tribal loyalties do not dominate politics.

At times, the Presbyterian minister’s enthusiasm and persistence has been unpopular with church leaders, as many preferred a distinct separation between religion and politics. However, he has been instrumental in encouraging the church to be one of the few institutions willing to hold the Kenyan government accountable. His activism does not stop here. Dr. Njoya travels the world, attending human rights conferences, and speaking about his experiences as a human rights defender in order to encourage and inspire others to protect and promote the human freedoms he so adamantly believes in.

During a recent trip to the United States, where he attended the annual Human Rights Defenders Forum hosted by The Carter Center, Dr. Njoya insisted on the basic rights to food, shelter, and health, in addition to political rights. While he acknowledges that you cannot have these basic entitlements without fundamental civil and political rights, he believes that rights to food, education, and health are often overlooked and treated as secondary. “Civil and political rights distinguish humanity from all other living creatures on earth. We have the unique ability to reason and so these rights are inherent to human beings, but enhancement rights are a necessary component to humanity as well.”

Dr. Njoya’s hope for the future of Kenya lies with his young successors and their commitment to human rights. “The biggest challenge for human rights defenders is the temptation to want instant and miraculous change… The change from dominance to governance or autocracy to democracy is as much cultural and social as it is political and requires inter-generational struggle”.

He understands his greatest accomplishment to be inspiring younger generations to fight and to struggle for the very same rights that he has worked to promote and protect for so long. Dr. Njoya is confident that the work of his followers will one day produce the change he has dreamed to see in Kenya and elsewhere around the world.

Timothy Murere Njoya is a retired Minister of the Presbyterian Church of East Africa and a leading advocate for justice and human rights in Kenya. Rev. Njoya received his PhD from Princeton Theological Seminary in 1971 and  Doctor of Divinity from Knox College, University of Toronto, in 1998. He is the recipient of the John Humphrey Freedom Award of the International Centre for Human Rights and Democratic Development (2000), the E.H. Johnson Award of the Presbyterian Church of
Canada/E.H Johnson Memorial Trust (1995), and the Father John Anthony Kaiser Human Rights Award of the Law Society of Kenya. Rev. Njoya is currently the Executive Director of Men for the Equality of Men and Women (MEW), a ground-breaking initiative that seeks to create equitable gender relations through public education and social action.

OPEN FORUM WITH REV. DR. TIMOTHY NJOYA: THE STATE OF THE KENYAN NATION Reviewed by samrack on February 28, 2015 .