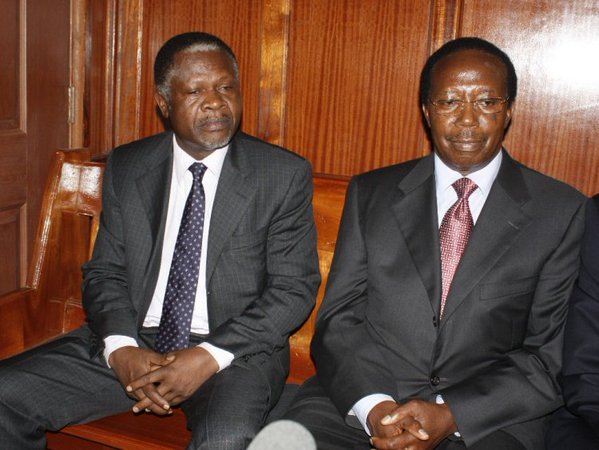 Former Finance minister Chris Okemo and former Kenya Power boss Samuel Gichuru at the High Court in August 2011 during a hearing on their extradition to Jersey Island over allegations of money laundering. Photo/CHRIS KIMANI

The state will not begin the process of extraditing former Finance minister Chris Okemo over money laundering pending the hearing of his appeal.

This follows an agreement by the Office of the Director of Public Prosecutions to await the hearing, as stated in court by deputy DPP Dorcas Oduor.

Lawyer Fred Ngatia had asked the court to suspend the extradition hearing at the magistrates court for his client’s appeal not to be overtaken by events.

The matter will be mentioned at the magistrates court on February 12, Ngatia said, adding his client would suffer prejudice if the court does not intervene.

He made his appeal before judges Alnashir Visram, GBM Kariuki and Sankale Kantai on Monday.

A court in Jersey issued a warrant for their arrest on April 20, 2011 after the island’s Chief Justice accused them of defrauding Kenya Power and laundering proceeds in the UK.

The two said the DPP had no powers to institute extradition proceedings against them.

They lost the bid, Judge Isaac Lenaola ruling that issues they raised at the High Court can be canvassed at the magistrate’s court which okayed their handover to Jersey authorities.

Lenaola also said no constitutional issues arise from the matter as it is purely criminal.

What got Okemo and Gichuru in trouble