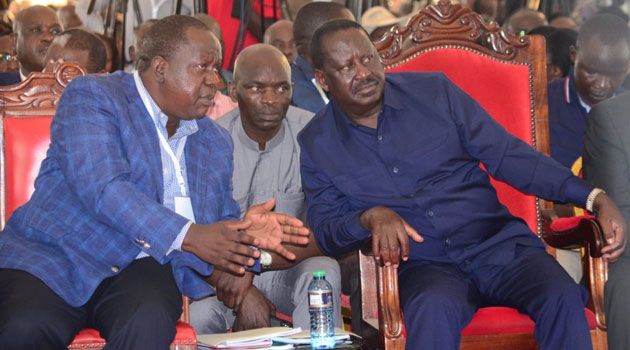 Speaking at the Gusii Sports Club during the first leaders’ consultative meeting to deliberate on the report, Odinga said urged Kenyans to carefully go through the Report and air out the recommendations.

he ODM Leader told participants who included 11 governors, 78 MPs, MCAs, elders, religious leaders, women and youth leaders and other professionals from across the Nyanza region, that BBI is the only bridge to take Kenyans to the proverbial Promised Land.

“Kenya is embarking on a new journey, I am confident that we will get to our destination. We have to unite as One People and One Kenya. That is the call that we are carrying from here,” said the former PM

He further appealed to leaders to avoid using the BBI Report to divide Kenyans along regional or ethnic lines.

“There is no country in the world that is similar to Kenya, therefore each and every country must solutions to each of its own problems and peculiarities. We cannot go and copy how they did it in America. We must deal with these issues us ourselves, that is why we side this is a game of inclusion, not excluding.”

“Don’t demonize anybody else; don’t begin by saying that it is us against them. We are all one. President Uhuru came with his people and I also came with my own and we committed to building bridges so that we can remove our citizens from poverty,” Raila stated.

On his part, CS Matiang’i who was accompanied by his Devolution counterpart Eugene Wamalwa urged the region leaders to maintain the rare unity they have shown in presenting common front so that their residents can reap the fruits of development.

“This is the first time we as the people of Nyanza are sitting together to deliberate on the direction we should take,” the CS stated.

The CS further urged the Kisii community against being swayed from supporting the unity pact signed between Odinga and President Uhuru Kenyatta on March 2018 to end hostilities which had arisen following 2017 General Election results.

“There are people who think they know everything, but we want to say don’t with mistake our silence to mean we are aloof to what is going on.”

“You know the truth is you can see clearly where the truth is. It is in our President and the old man (Odinga) you see here; they are the wisdom of BBI. So, I stand here to confirm, that I will follow this two wherever they led us and I only asking you to do the same,” said the CS.

Matiang’i urged the MCAs to organize consultative forums in their wards to engage and sensitize their constituents on the contents of the BBI Report.

Odinga also released the schedule for next forum beginning with Kakamega on Saturday, January 18.

The series of consultative meetings will then move on to Mombasa, Embu, Garissa, Eldoret, Suswa, Nakuru before concluding with one in President Kenyatta’s backyard of Central region.