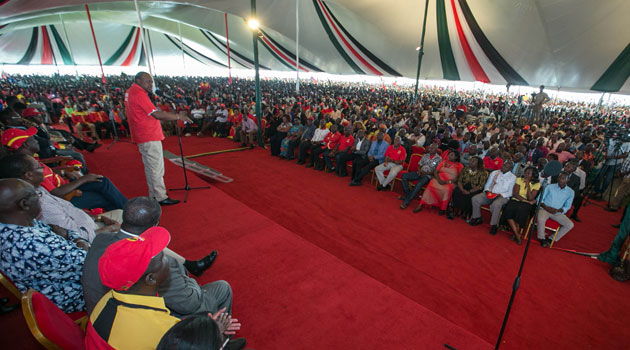 “The changes will entrench transparency in the electoral process and guarantee free, fair and credible elections,” President Kenyatta said By PSCU

President Kenyatta said on Saturday that no one could stop the October 26 fresh presidential election as he met two largest gatherings of Western Kenya leaders in their traditional capital of Kakamega.

A 20,000-strong delegation, including at least 500 representatives from each constituency, assured President Kenyatta that they would stand behind him, in a move seen to cement the Kenyan leader’s growing influence in a region previously associated with the opposition.

A host of former Opposition diehards, including Paul Otuoma, Ababu Namwamba, Alfred Khangati and Moses Akaranga came out strongly in support of President Kenyatta, urging residents to shun the opposition which has over the years taken them for a ride.

The President, accompanied by Deputy President William Ruto, also emphasised Jubilee’s stand on changing the electoral laws, saying it would ensure transparency and accountability on the part of electoral officials.

“The changes will entrench transparency in the electoral process and guarantee free, fair and credible elections,” President Kenyatta said as he told Opposition leader Raila Odinga to stop interfering with the October 26 fresh election in the hope getting powers through the back door.

“There is no other route to the presidency except through the ballot box,” President Kenyatta reminded the Opposition leader.

President Kenyatta showcased Jubilee’s rich development history of the last four-and-a half years including the unprecedented construction of new roads, expansion of electricity connection to households and installation of start-of-the-art medical equipment in two leading hospitals in each of the four counties.

Deputy President Ruto censured the opposition for dividing Kenyans on ethnic grounds at the expense of focusing on issues that can unite the country.

He told members of the Luhya community to reject the opposition and support Jubilee because of its development agenda for the region and the country.

The DP thanked the people of Western Kenya for rallying behind the Jubilee’s call for unity and progress, noting that the region gave the ruling party eight Members of Parliament in the August 8 polls.

“With open arms, we have come here to tell you that we are ready to work with you. The outdated politics of tribalism has no place in the Kenya of today.

The DP said Jubilee is ready for the October 26 fresh presidential polls in line with the Constitution and the Supreme Court ruling that annulled the August 8 election, saying the Opposition should stop interfering with the process.

The leaders from the four Western Kenya counties of Kakamega, Busia, Bungoma and Vihiga expressed their confidence on President Kenyatta’s leadership, affirming their support to his re-election bid in the October 26 fresh election.

They said the region has witnessed unprecedented development in the last four-and-a-half years, adding that residents stood to benefit more from the Jubilee administration than from the opposition.

“We will mobilise our people to ensure you get more votes in the October 26 fresh election than you did on August 8,” Mumias East MP Benjamin Washiali who is also the National Assembly Chief Whip assured President Kenyatta as he lambasted opposition leader Raila Odinga for misleading the Luhya community.

“The ‘Luhya nation’ has woken up and do not want to be left out of Government because we know Kenyans will once again reconfirm President Kenyatta as the people’s popular choice,” he added.

The MPs said that the changes to the electoral laws initiated by Jubilee will streamline elections and ensure those who mess up the process are punished.

The leaders said they are keen to work with President Kenyatta and his deputy to unite the country, saying the opposition has nothing to offer the region in terms of development and progress as they vowed to double the President’s votes in the region in the October 26 fresh election.

“We can no longer continue to follow the opposition blindly while there is proof that they are leading us to the wrong direction,” the leaders said as they resolved to mobilise support for President Kenyatta.

Namwamba said the Luhya community has reached the point of no return in their support for Jubilee, the winning team.

Supporting the changes in the electoral laws fronted by Jubilee, the Labour Party leader said the move is long overdue, saying laws are enacted to cure mischief.

President Kenyatta thanked the people of Western Kenya and their leaders for their support that ensured his victory in the August 8 polls. He pledged to continue working with them in his transformation agenda geared towards lifting the lives of the people of Western region as well as the rest of the country.

“With your support and that of Kenyans across the country, I am confident that we will reclaim our August 8 victory,” said President Kenyatta said.

President Kenyatta emphasised his vision for unite and progress and urged the leaders to sensitize residents on the need to shun divisive politics propagated by the opposition.

“We call on our competitors to be mindful of the welfare of Kenyans and stop spearheading activities that could tear the country apart,” said President Kenyatta.

The President said unlike the opposition which thrives on ethnic balkanization, his administration will remain steadfast on entrenching peace and unity.

Veteran politicians Fred Gumo, Musikari Kombo and Noah Wekesa also addressed the meeting, urging Odinga to retire from politics to give room for the country to progress under the youthful leadership of President Kenyatta and his deputy.