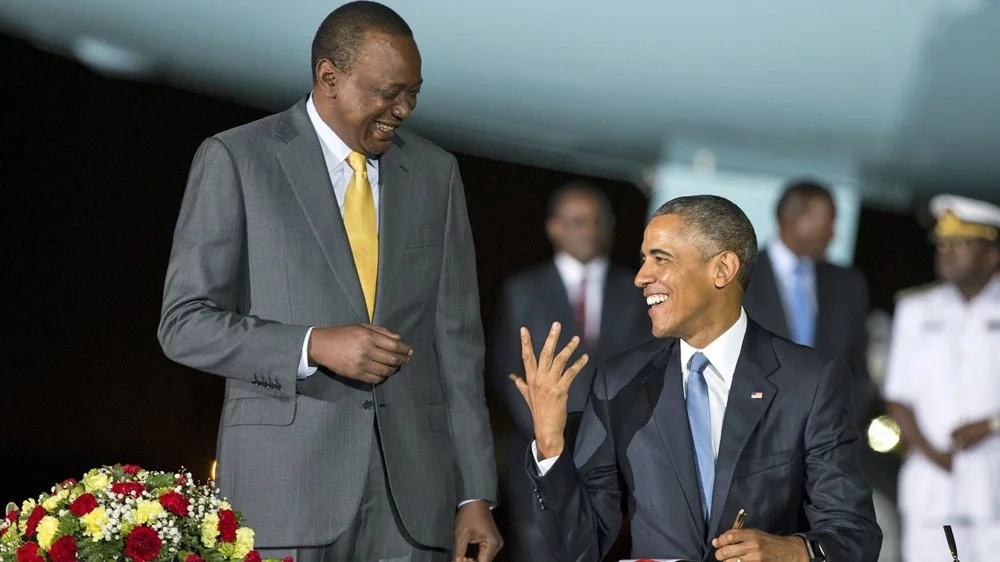 President Uhuru (l) receives former USA president Barack Obama during his trip to Kenya in 2015 at the JKIA. Photo: PSCU.

It is D Day and Kenyans are already thronging polling stations in anticipation to cast their votes – This comes after politicians mounted intense campaigns ahead of the Tuesday, August 8, most highly contested election in Kenya’s history – Here is Barack Obama’s message to Uhuru and Raila as he also urged Kenyans to vote in the right leaders to secure Kenya’s bright future The election day is upon Kenyans and many are heading to polling stations to cast their votes in this highly anticipated Tuesday, August 8 election. In the weeks leading up to this day, politicians have mounted intense, passionate campaigns both physically and on social media in this highly contested election. Many, especially, are eager to cast their presidential vote for either the two main presidential candidates to watch; incumbent President Uhuru Kenyatta and NASA’s Raila Odinga, or the other five presidential candidates.

With high expectations from botth the local and international communities for a peaceful election, former United States of America president Barack Obama was among the first to send their well wishes to Kenyans, as well as a message to Uhuru and Raila. According to his statement posted on Twitter on Monday, August 7, Obama urged Kenyans to vote in the right leaders to secure Kenya’s bright future. Kenyans will be picking their leaders- the since the devolved government was introduced- on Tuesday, August 8. Above is the senatorial ballot paper. Photo: Citizen TV.

I urge Kenyans to reject a politics of tribe and ethnicity and embrace the extraordinary potential of an inclusive democracy. The choice is in your hands because you more than anyone know the needless pain and agony thousands suffered as a result of the crisis in 2007. You can make clear that you will reject those that want to deal in tribal an ethnic hatred. Today, those voices- your voices- are needed more than ever,” said Obama in part. Below is the full statement:

In a separate message to Uhuru and Raila, he reminded them that this election is a milestone for Kenya and the proverb “we have not inherited this land from our forebearers, we have borrowed it from our children” should be respected.

“President Uhuru and Raila Odinga, you must ensue unity among Kenyans prevails regardless of the outcome. I have witnessed Kenya’s remarkable progress and I’d like to return to see you fulfill your even more remarkable potential,” added Obama.

Obama’s sobering message to Uhuru and Raila as Kenya’s highly anticipated election kicks off Reviewed by samrack on August 8, 2017 .

President Uhuru (l) receives former USA president Barack Obama during his trip to Kenya in 2015 at the JKIA. Photo: PSCU.  Obama’s sobering message to Uhuru and Raila as Kenya’s highly anticipated election kicks off  It is D Day and Kenyans are already thronging polling stations in anticipation to cast their votes – This comes