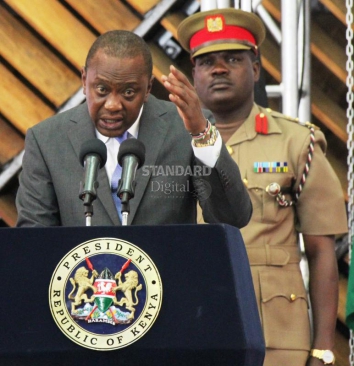 The Government has created a “super database” which will enable State agencies to bring up details about a person at the click of a button. President Uhuru Kenyatta Wednesday launched the Integrated Population Registration System ( IPRS), which allows access to an individual’s entire registration and identification records using a single personal identification number.

The system will capture critical data of all Kenyans and foreigners residing in Kenya, including refugees. Through the platform, all critical documents such as birth certificates, national identity cards, passports, Kenya Revenue Authority tax status, National Health Insurance Fund (NHIF) and National Social Security Fund (NSSF) information will be accessible at the click of a button. INFORMATION CAPTURED “We need to know how many people we serve, who they are, what their needs and aspirations are. We need to know about new citizens as soon as they are born or naturalised. Likewise, we needed to know about those who leave our midst, when and why,” said the President See also: President Uhuru says will not interfere with EACC affairs Previously, data on Kenyans and non-Kenyans was contained in manual systems maintained by different institutions. These ranged from the Civil Registration Bureau, National Registration Bureau and the Department of Immigration to the Office of the Registrar-General, NSSF and the NHIF. Uhuru said that previously, anyone desiring information on an individual had to navigate huge volumes of manual data in different places. “This challenge hampers the capacity of stakeholders to detect or prevent fraud, impersonation or other criminal activity. It also makes it costly to generate proper planning information,” he said. MASTER DATABASE The President said that IPRS was the beginning of the journey to ultimately establish Kenya’s National Master Database which would support the third generation identity card system, e-Border, e-Visa, e-Passport and the aliens management systems. He called on Kenyans to ensure that all births and deaths are officially reported, and transmitted to the National Population Register.
Read more at: https://www.standardmedia.co.ke/article/2000154478/nowhere-to-hide-as-kenya-automates-citizens-data/

Nowhere to hide as Kenya automates citizens’ data Reviewed by samrack on March 11, 2015 .

President Uhuru Kenyatta speaks yesterday at the Kenyatta International Convention Centre during the launch of the Integrated Population Registration System. [PHOTO: MBUGUA KIBERA/STANDARD] NAIROBI: The Government has created a “super database” which will enable State agencies to bring up details about a person at the click of a button. President Uhuru Kenyatta Wednesday launched the