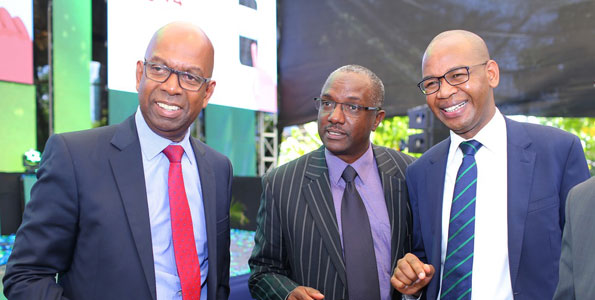 From left: Safaricom CEO Bob Collymore, CBA chief executive Jeremy Ngunze and KCB Bank Group chief executive Joshua Oigara during the launch of the KCB-M-Pesa account at Sankara Hotel in Nairobi March 10, 2015. The KCB-M-Pesa account will enable customers to get loans using their mobile phones, the loans will be offered with a flexible repayment period ranging from one month to six months. PHOTO | SALATON NJAU |  NATION MEDIA GROUP

KCB Group has launched a mobile phone-based loan repayable at a fixed interest rate of between four and 12 per cent in what is set to rival Commercial Bank of Africa’s highly successful M-Shwari and intensify the battle for mobile banking with other lenders.

KCB M-Pesa was unveiled Tuesday in partnership with Safaricom, giving subscribers of the telecom’s mobile money platform access to loans of between Sh50 and Sh1 million repayable for between one and six months.

Mobile banking has become a competitive edge for Kenyan lenders, giving them easier and broader access to customers.

“In the last one year KCB has seen its customer transactions with M-Pesa triple to Sh125 billion, while the volume of transactions has grown from 10,000 a day to 100,000,” said Joshua Oigara, KCB’s chief executive officer at Tuesday’s launch.

“Now, with a dedicated product with the most comprehensive offering, the partnership will widen the possibilities of what customers can do using their phones,” he added.

KCB is banking on its interest rates and the more flexible repayment periods to attract even non-customers and possibly replicate the runaway success of M-Shwari, a partnership between Safaricom and CBA.

The newly-launched product will also compete for customers with Equity Bank’s Eazzy Loan which the bank is providing through Equitel, the lender’s six-month old mobile platform.

KCB M-Pesa borrowers will repay the loans at interest rates of four, nine and 12 per cent over periods of one, three and six months respectively.

This interest is deducted during loan processing, meaning that the funds deposited into a user’s KCB M-Pesa account, for onward transfer to their M-Pesa account, will be less this facilitation charge.

Customers’ credit limits are calculated based on their M-Pesa transaction activity and their savings with KCB, in the event that they are account holders.

Subscribers can also place money in a fixed deposit accounts that will earn them interest of between three and six per cent per annum for savings periods of between one and 12 months.

“Once a customer has subscribed to the new product, their credit worthiness will be further affected by their loan uptake and repayment history as well as their savings,” said Bob Collymore, Safaricom’s chief executive officer. CBA offers their M-Shwari loans at a flat rate of 7.5 per cent.

The loans are repayable within a month. Fixed deposits, on the other hand, attract an interest earning of six per cent per year.

The maximum M-Shwari loan offered through the phone was initially capped at Sh5,000; but CBA now allows customers with good repayment records to borrow in excess of Sh8,000.READ MORE