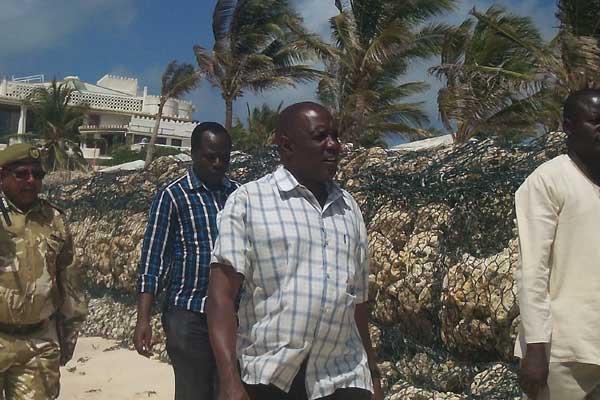 National Land Commission (NLC) chairman Muhammad Swazuri has protested over the building of a 100-metre wall along the beach next to the Malindi Marine National Park.

Dr Swazuri was reacting to complaints from Kenya Wildlife Service (KWS) officials, who said the wall was accelerating soil erosion and had therefore become a threat to the beach and sea life.

The sea wall was built by Italian billionaire Flavio Briatore two years ago using imported material at the cost of Sh50 million in order to safeguard his property after the ocean began eroding part of the resort.

Dr Swazuri, who was accompanied by senior KWS officials and Deputy County Commissioner Karun’go Kamau, questioned why the investor was allowed to put up a sea wall in the area, which has now led to serious environmental degradation.

The NLC boss spoke on Monday after touring the DCC offices, the Malindi Marine National Park and the sandy beaches along the Indian Ocean where he revoked four title deeds to land owned by private investors that were grabbed from the KWS.

Addressing the press, the NLC boss said action would be taken to prevent bigger disasters since many buildings along the beach could be destroyed due to soil erosion.

“We shall bring on board the Kenya Maritime Authority and Kenya Ports Authority to give their expertise on the matter,’’ he said.

He, however, said that there was no need for a blame game, even as it was alleged that the National Environment Management Authority (Nema) had approved the building of the wall to extend up to the marine park.

“What needs to be done is an immediate action to save further damage on our sandy beaches and properties along the coastal strip,” he said.

Dr Swazuri noted that a committee carrying out a case study on the erosion had recommended that the wall be demolished but it was not clear why the demolition had not been effected.

Earlier this year, Mr Briatore told journalists that he could not risk having his billion-shilling investment swept away by the sea when there was a way to stop the destruction.

NLC clash with Italian tycoon over erection of beach wall next to marine park in Malindi Reviewed by samrack on September 15, 2016 .