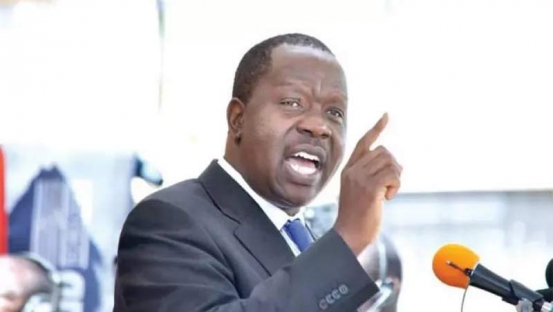 New measures to block cheats with fake certificates, curb the theft of public funds through ghost teachers, and inflated student enrolment figures will be implemented next month. From September 28, all students in public institutions from nursery school to university will be assigned a six- character Unique Personal Identifier (UPI) linked to an electronic database with all the education records of the individual. ALSO READ: CS Matiang’i: I will not be threatened in my quest to protect Kenyans The system will be similar to the personal identification number (PIN) issued to taxpayers for purposes of transacting business with the Kenya Revenue Authority and other Government agencies, and through which the taxman has useful data to enforce compliance. Education Cabinet Secretary Fred Matiang’i has described the new Kenya National Education Management Information System (Nemis) as “the single source of truth for information” on all Kenyan learners and schools. The tamper-proof system will be the ultimate record for the sector as it will consolidate data from all the Ministry of Education institutions. The students’ identifier will take the form ‘AAA-BBB’ and will be used at every stage of the student’s education. The 1.6 million Kenya Certificate of Primary Education and Kenya Certificate of Secondary Education candidates sitting for this year’s examinations will be allocated the UPI’s between August 29 and September 5. By the click of a button, it will be easy to track the academic progress and qualifications of all persons, which will effectively deal a blow to cheats who resort to bogus academic papers. Sources at the Kenya National Examinations Council (Knec) said they had introduced other security features as fake documents remain a challenge. “We have introduced photographs and a raft of security features to curb forgery,” said a senior Knec official. The Nemis database will be available to potential employers, colleges and other stakeholders for verification of individuals’ details before admission or offer of a job. Given that the unique number identifies an individual teacher, it will also make it harder for unscrupulous school managers to retain ghost teachers on their payroll. Also, the exact student enrolment figures will become clear hence closing the avenue for school managers who inflate numbers to secure higher capitation from the Government. Each primary and secondary learner who receives Government capitation will be tracked and actual data of beneficiaries generated. In addition, the system will control the mushrooming of illegal institutions. This is because each public school, college and university will be issued a mandatory four-character unique identifier to enhance accountability. SCHOOL CODE The school code take the form ‘AAAA’ and institutions without the special codes will be shut down. “We will close down all schools that will not be in our database,” said Dr Matiang’i. The CS said the system – conceptualised, designed and developed by a team of officers from Government ministries and State departments – is designed to provide quality data that is reliable, relevant, and easily accessible. User manuals for the Nemis and other policy documents will be developed between August 20 and 28. Education stakeholders validated the Nemis system last week. Piloting is expected to be done in all national schools and 470 primary schools between September 10 and 15. On September 20, senior Ministry of Education managers will be trained. A detailed look at the Nemis infrastructure shows that teachers and lecturers’ data will be deposited in a central folder and will be accessible for planning and decision making. Teachers, in addition to their Teachers Service Commission numbers, will also be allocated special codes. Under resource allocation, the system will determine free education capitation beneficiaries and reveal teacher needs per school. Student tracking and support services, infrastructure needs and learning materials will also be determined by Nemis. “It will be a smart school with data on finer details, which will enhance accountability,” said Robert Masese, the acting director general of education. Matiang’i revealed that a pilot audit of some schools returned glaring inconsistencies of student enrolments, signalling a huge loss of free education money. His revelations mirror a recent Ministry of Education audit report that indicated that the Government could be losing up to Sh1 billion annually to ghost students. The Basic Education Statistical Booklet (2014) report revealed that nearly half a million ghost learners may be receiving the capitation. The census report shows that primary school enrolment in 2014 stood at 9.55 million children against 9.95 million in the ministry’s data. This means 400,000 ghost primary school learners may have received capitation money in 2014. In the same year, enrolment figures for secondary school stood at 2.33 million against the census finding of 2.31 students. This means 20,000 ghost secondary students may have received capitation money.
Source: https://www.standardmedia.co.ke/

New system to track student’s progress from nursery to university Reviewed by samrack on August 23, 2017 .

Share thisFacebookTwitterPinterestEmailWhatsAppNew system to track student’s progress from nursery to university New measures to block cheats with fake certificates, curb the theft of public funds through ghost teachers, and inflated student enrolment figures will be implemented next month. From September 28, all students in public institutions from nursery school to university will be assigned a