Nderitu Gachagua deputy to be sworn in as Nyeri governor Monday 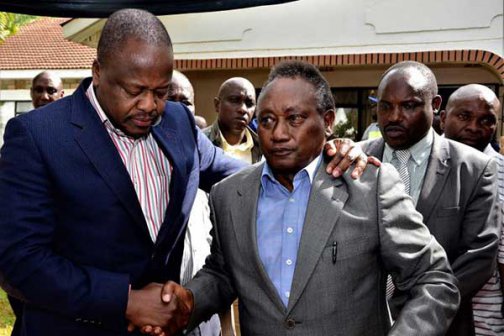 Nderitu Gachagua deputy to be sworn in as Nyeri governor Monday

Nyeri Deputy Governor Samuel Wamathai will be sworn in as governor at the county headquarters this morning.  Governor Nderitu Gachagua died at a London hospital on Friday. According to County Speaker David Mugo, Mr Wamathai will be sworn in at 8am after Attorney General Githu Muigai and Chief Justice David Maraga gave the go-ahead. The ceremony will be overseen by Nyeri High Court presiding judge Jairus Ngaah. Mr Gachagua’s family has said members will attend the ceremony and that it supports the new county chief. And preparations for Gachagua’s burial were stepped up yesterday following the arrival of key family members from London. At the same time it has emerged that shortly before his death in London on Friday, Gachagua was so keen to return home that he was ready to hire a private jet. His brother, Rigathi Gachagua, said the governor had expressed his desire to come back home but Kenya Airways declared him too frail to fly on a commercial flight. ALSO READ: Nyeri deputy Governor to be sworn in as CECs rendered jobless Prayer meetings will be held at All Saints Cathedral in Nairobi and in his Nyeri and Nairobi homes. The family said it was still working on the paperwork to have the body flown home. Gachagua will be buried at his home in Hiriga. Family, close political allies, and villagers converged in Hiriga yesterday to mourn Gachagua. Among those who went to pay tribute to the governor were Wamathai, Senator Mutahi Kagwe, Mathira MP Peter Weru, and several MCAs. It was not yet clear whether Gachagua would be accorded a state funeral and no burial date was provided. Gachagua’s brother, Rigathi, said the family was in talks with officials from the national government and county governments on the preparations. “We are consulting with the two governments on modalities on which he will be laid to rest,” he said. He added that Foreign Affairs Cabinet Secretary Amina Mohamed and Principal Secretary Monica Juma had been in contact. The process of bringing the body home will begin today and the cortege is expected in the country on Thursday morning. “If the paperwork is completed, the body will be in the country early Friday morning. The paperwork makes it a long process, especially because of the weekend,” Rigathi said. At the same time, the family extended an olive branch to Gachagua’s political detractors. The governor was on a collision course with a number of politicians in the county. ALSO READ: Nyeri Governor dies after two-year battle with cancer “For those who fought him, we have nothing against you. Gachagua had forgiven everyone including those who fought him when he was down. If you are genuine in saying that you are sorry that he is gone, please welcome,” Rigathi said. Yesterday, Wamathai was overwhelmed with sorrow and broke down in tears. He was consoled by Kagwe.
Read more at: https://www.standardmedia.co.ke/

Nderitu Gachagua deputy to be sworn in as Nyeri governor Monday Reviewed by samrack on February 27, 2017 .