NASA strategist David Ndii given a dress down after suggesting Uhuru should be impeached. Photo: KTN Kenya/Twitter

The controversial economist was lambasted by his followers online after suggesting Uhuru should be impeached – Many questioned why Ndii was calling for such an action yet NASA did not recognise Uhuru’s presidency – Some reminded him that NASA does not have enough numbers in Parliament to carry out such a task National Super Alliance (NASA) strategist David Ndii on Monday, February 5 put himself in the line of fire after claiming President Uhuru Kenyatta should be impeached. The NASA strategist’s call to have president Uhuru to leave office was followed by quick reactions from his followers on Twitter

NASA strategists had launched attacks on President Uhuru Kenyatta whom he claims is an illegitimate president. He was talking after the arrest of key NASA and National Resistance Movement (NRM) leader saying that the orders that the president supposedly gave were illegal. Many of those who responded criticised the Oxford-educated economist for his unrelenting attacks on the President. 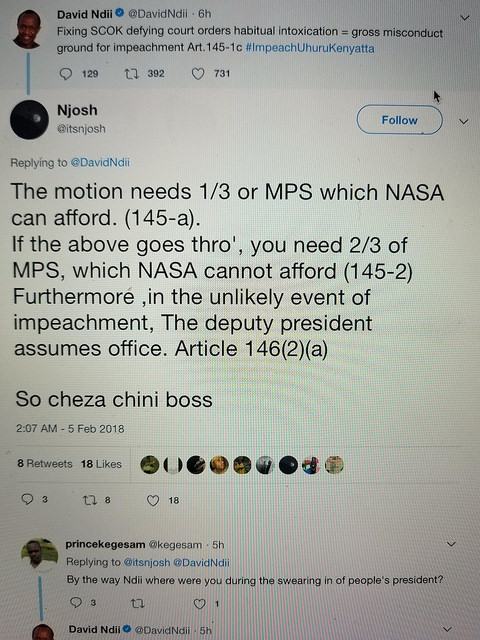 Tags: NASA strategist David Ndii given a dress down after suggesting Uhuru should be impeached
Previous Post