NASA cries foul after Uhuru implements part of its manifesto

NASA cries foul after Uhuru implements part of its manifesto

Uhuru Kenyatta has been accused of implementing the NASA manifesto shortly after declaring the Hindu as Kenya’s 44rd tribe – Economist David Ndii shared a snippet of a NASA manifesto which if impemented would seek to include seven other groups as Kenyan tribes – According to the Manifesto, the Waswahili, Elwana, Munyonya, Waata, Boni, Dushnak, Sakuye and Segeju are still not recognized as Kenyan tribes – NASA plans to expunge the category of ‘others’, by recognising all the tribes in Kenya regardless of their numbers – By including Hindu as the 44th tribe in Kenya, Uhuru Kenyatta was accused of picking a leaf leaf from NASA’s playbook NASA has accused President Uhuru Kenyatta of implementing the NASA manifesto by declaring the Hindu as the 44th Kenyan tribe.

Part of the NASA manifesto as seen by TUKO.co.ke decrees that once NASA is elected to office, they will expunge the category of ‘others’ by declaring all hitherto unrecognized groups as tribes.

They include the Waswahili, Elwana, Munyonya, Waata, Boni, Dushnak, Sakuye and Segeju which are still not recognized as Kenyan tribes. President Uhuru declared the Hindu as the 44th Kenyan tribe on Saturday, July 23 citing articles 11 and 44 of the Kenyan constitution. 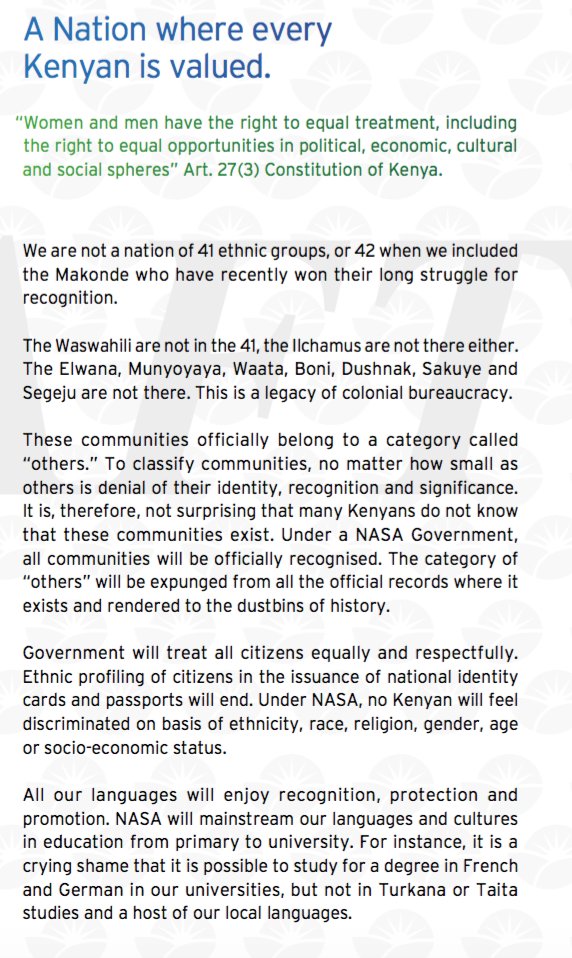