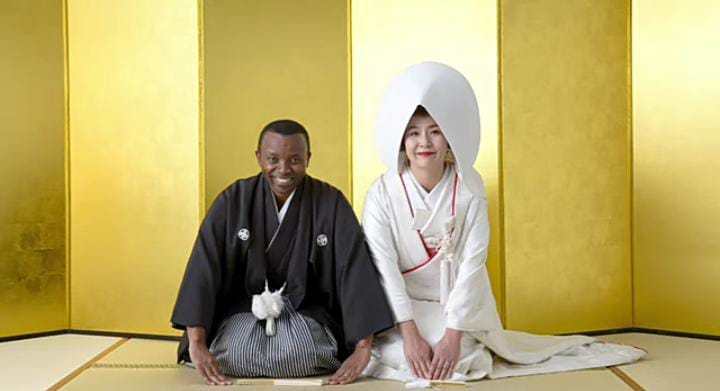 Japanese Kenyan woman Yuka has in a candid interview opened up about her childhood life, education and how she ended up being married to a Kenyan man despite her parents not approving their union.

Born and raised in Japan, Yuka had never thought she would live to have a family of her own or even get married in the first place.

According to her growing up in a broken family made her so hopeless about life and it was only the thought of what a section of Africans go through that changed her mindset.

Speaking to Tuko, Yuka narrated how her mother and siblings with her included went through a difficult time in the hands of an abusive father. Growing up, she recalls how she never had anyone to look up to considering that most of her relatives were in troubled marriages.

“I was born to unfortunately a broken family. I had a dad but he was very abusive and used to beat us. It made me lack confidence in and I thought I would not make it in life. I thought life is such a pain” she stated

This frustration pushed her to suicidal thoughts but she bounced out of it after reflecting upon the fact that some people from other parts of the world like Africa die of starvation and other unfortunate causes.

The reflection later convinced her that she was more priviledged and she made a vow to do better in her life so that she could eventually help others.

Yuka met her now husband Nick while studying in England after she decided to take up a humanitarian course with an intention of helping those in need. The two became friends after she expressed interest in joining a church music band in which he was the band master.

Initially, she reveals that he had no interest in her but it is during their graduation that he confessed his love for her. This later saw her travel to Kenya and even got to meet his parents before she travelled back to Japan.

A year later, the couple got married in Kenya in a ceremony that her mother attended even though she was still not in agreement with the decision.

She however does not blame her mother for being against her union saying she clearly understands that she was uneducated and had not interacted with the rest of the world.

Although interacial marriages are not a bed of roses Yuka and her husband agree that they have both learnt to adjust in terms of the cultural diferences and also allow God who is the pillar of their relationship to be at the center of it all.

In regard to the relationship with her parents, Yuka says that she hopes that they will one day be proud of her choices and settle their differences.  Her husband also disclosed that they are currently in good terms with Yuka’s mother whom she describes as a close friend.

The couple are founders of HIKARI music school which offers opportunities to many young people and has since attracted international students especially after the COVID-19 pandemic forced them to have online classes.

Yuka and Nick have been married  for 10 years now  are now raising children together.

My Mom Completely Cut Me Off When I Decided To Marry A Kenyan – Japanese Woman Narrates Reviewed by samrack on October 23, 2020 .

Share thisFacebookTwitterPinterestEmailWhatsAppThe Japanese woman who was cut off for marrying a Kenyan man My Mom Completely Cut Me Off When I Decided To Marry A Kenyan – Japanese Woman Narrates Japanese Kenyan woman Yuka has in a candid interview opened up about her childhood life, education and how she ended up being married to a