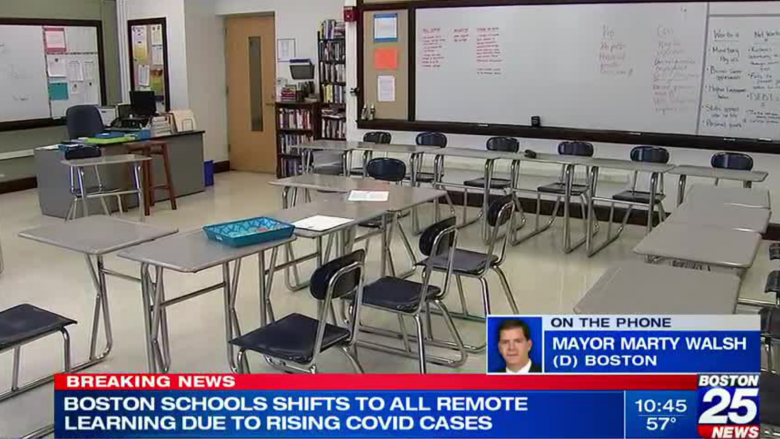 State education officials on Thursday said that a total of 202 coronaviruscases have been identified in Massachusetts schools from Oct. 15 to Oct. 21.

Those cases include 129 students and 73 staff members, spread out between districts, approved special education schools and education collaboratives, according to data released Thursday by the Department of Elementary and Secondary Education.

DESE releases the coronavirus case data each Thursday. It reflects COVID-19 cases as reported to the department, though student cases in districts with fully remote learning models are not included. For staff, the report includes cases for employees who have been in a district building within seven days before the report of the positive case.

Living with #COVID19 means being able to adapt as needed and recover, while containing the spread of the virus.

Thank you @PoppyHarlowCNN and @jimsciutto for speaking with me this morning. https://t.co/EegtiRYjxZ

There is an estimated 450,000 students and 75,000 staff members in public school buildings, DESE said.

Methuen and Lincoln-Sudbury saw the most student cases, with six each, according to the data. Northborough-Southborough had five cases, and Chelmsford, Gloucester, Hudson, Marshfield, Peabody and Waltham each had four cases.

There were three staff cases each at Fitchburg, Lawrence, Lynn, Malden and West Springfield. Several other districts had two or one cases.

For approved special education schools, the Riverside School and May Center School for Autism and Developmental Disabilities (Randolph) both had one student case. There were two staff cases at the JRI Meadowridge Littleton Academy School.

On Wednesday, the Boston Public Schools announced all students currently in school buildings would go remote, and students who had not been phased in yet for in-person learning would stay online, after the city’s seven-day COVID-19 positivity rate increased to 5.7%, up from the previous week’s rate of 4.5%.

There have been no major outbreaks of the virus at Massachusetts schools, something DESE Commissioner Jeffrey Riley noted during a Massachusetts Board of Elementary and Secondary Education meeting Tuesday.

Riley said during the meeting that while most districts with low coronavirus transmission rates have made progress to get students back into classrooms for some form of in-person learning, audits were starting in two districts.

Watertown and East Longmeadow are being audited because they have not significantly moved their timeline for returning students to in-person or hybrid instruction, officials said.

Riley and Gov. Charlie Baker have stressed that they want as many Massachusetts students learning in-person as possible, in line with state health metrics that rate communities as high-, moderate-, or low-risk for spreading the virus.

Share thisFacebookTwitterPinterestEmailWhatsApp129 student, 73 staff cases of COVID reported in Massachusetts schools in last week State education officials on Thursday said that a total of 202 coronaviruscases have been identified in Massachusetts schools from Oct. 15 to Oct. 21. Those cases include 129 students and 73 staff members, spread out between districts, approved special education