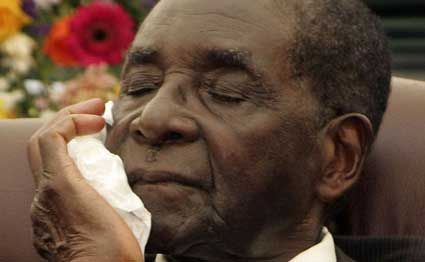 Zimbabwean President Robert Mugabe who is reportedly resisting pressure by the army to quit. South Africa’s opposition party, the Congress of the People (Cope), has rejected calls to offer him political asylum in the country. FILE PHOTO | JEKESAI NJIKIZANA | AFP

There have been growing calls for President Mugabe to be given political asylum, led by the Economic Freedom Fighters (EFF) and the African Diaspora Forum (ADF).

The Zimbabwe army on Wednesday took control of the country, confining the veteran leader to his Harare home.

President Mugabe was reportedly resisting the army pressure to quit.

The EFF was first to make the asylum call, with its leader Julius Malema saying such a move would facilitate a peaceful transition in the southern African country.

“We call on the South African government to prepare to welcome President Mugabe for political asylum. He must be allowed to come to South Africa so that a peaceful transition can indeed take place.”

“Mugabe needs to leave Zimbabwe. I think he should be granted refugee status in one of the African countries and South Africa is well placed to host him because of its leadership role in the SADC,” he said.

However, Cope has called upon all South Africans to resist any attempts “to make South Africa the home of last resort of those leaders who have violated the human rights of the citizens of their very own countries”.

“South Africa is a democratic and human rights sensitive nation. Allowing a pariah and disgraced leader such as Mugabe asylum in our country would be an affront to the values and principles upon which our constitutional democracy is based,” Cope leader Mosiuoa Lekota, said.

But Mr Lekota said instead of allowing leaders like Mugabe to make South Africa their home, the country should rather ensure that it remained a refuge of hope to those suppressed and defenceless citizens of Zimbabwe.