Mudavadi to Atwoli: Raila betrayed us 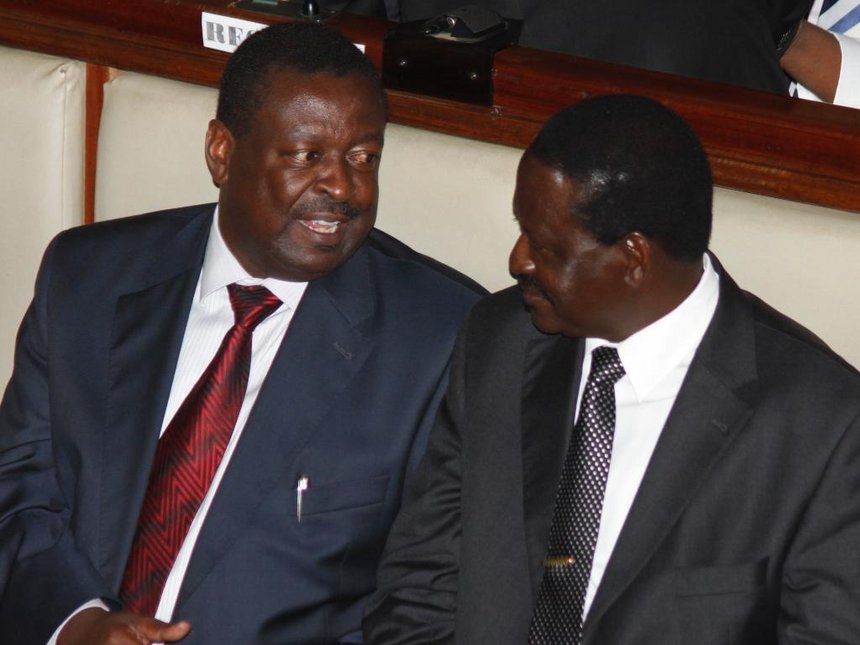 Mudavadi to Atwoli: Raila betrayed us

ANC Leader Musalia Mudavadi has claimed that Raila Odinga tricked his co-principals into missing his controversial swearing-in ceremony on January 30.

His disclosure exposes the simmering unease within the NASA coalition, despite the show of normalcy as affiliate parties begin to switch their focus to the 2022 race.

Musalia made the revelation on Sunday during a meeting with a section of Luhya MPs and the Western Elders’ Council at Francis Atwoli’s home, where he explained his absence from the ceremony.

He claimed that Raila “sneaked” into Uhuru Park as the other principals waited for him that morning at a location in Nairobi believed to be the Serena Hotel to continue discussions that had extended late into the previous night.

According to Mudavadi, the principals had agreed to a last-minute meeting where many issues, including protocol and the nature of the presidential and deputy presidential oaths, were to be finalised.

“Musalia told us the meeting was to come up with the roles each of the principals would play at the venue and fine-tune the speech that would be read by Odinga,” an MP who attended the meeting told the Star.

Days later, the principals met in a show of unity at which Kalonzo claimed it had been planned that Raila take the oath alone first, and he would follow later.

Since then, he has been flip-flopping on the oath, claiming it is illegal and some times placing unspecified conditions to be fulfilled before he takes it.

The principals initially claimed they could not proceed because their police security had been withdrawn, which drew severe criticism from their supporters.

Mudavadi’s statements are the clearest indication of suppressed hard feelings, despite the coalition’s public show of camaraderie.

ANC Secretary General Barrack Muluka and Wiper Chairman Kivutha Kibwana had claimed days to the inauguration that Raila’s ODM party had been making unilateral decisions and dictating to its affiliates while remaining cagey on critical details.

“Kalonzo and Raila were to meet that morning. But when Kalonzo got to the venue, only Wetang’ula and Mudavadi were there…ODM has not been fair. Even our representatives in the plans were kept in the dark most of the time,” Kivutha protested a day after the swearing-in.

ODM MPs yesterday reacted with fury at Mudavadi’s claim but declined to go on record for fear of being accused of rocking the fractious coalition.

“They are saving face. They hope that by maligning Raila’s name, they will galvanise ethnic support,” protested a senior ODM leader.

The swearing-in, and the no-show by the co-principals, has remained a sore issue in the coalition. Soon after the event, some ODM leaders publicly told Raila to chart a new political path. One of them, Nyando MP Jared Okello, said Raila should scout for new trustworthy friends.

“I still maintain that Raila Odinga should cast his political net wider to catch new allies. Abandoning our People’s President at such a crucial moment of his enthronement was the epitome of betrayal and cowardice. The other three principals were all in the country and none was indisposed. They all knew about the swearing-in ceremony,” Okello said on February 4.

On Sunday Mudavadi is said to have told the meeting that NASA does not belong to Raila but the four affiliate parties.

After the marathon meeting at Atwoli’s rural home, the Cotu Secretary General made a U-turn on his support for Mudavadi, after recently castigating him as “a coward” whom he would never again support.

“I will never in my lifetime support Musalia Mudavadi. If you want to become president, you must know that you will be commander-in-chief of the defence forces,” Atwoli scoffed at Mudavadi two weeks ago.

But after the closed-door meeting, the leaders emerged to tell the press that Mudavadi remains the Luhya supremo and presidential candidate for 2022.

“One of our resolutions is that Wycliffe Musalia Mudavadi should continue to steer this region unabated,” Atwoli stated.

The Atwoli-Mudavadi truce was attended by elders and leaders, mainly from the ANC.

But the resolution that anyone who wants to engage the Luhya community politically must go through Mudavadi as the Community Spokesman was immediately rubbished by Wetang’ula.

“Atwoli’s cheap gimmicks with a handful of imposters and masquerades will not solve Mulembe unity issues. He is a turncoat we should ignore. Atwoli’s aim is to divide and not unite Luhyas. Where were elected Luhyas from Bungoma, Trans Nzoia and Nairobi? They don’t matter?” he protested on Twitter.

According to Savula, the MPs resolved that Mudavadi should now focus on his 2022 Presidential bid.

“We have resolved that anyone undermining Mudavadi will be dealt with by the masses in the region,” he said.

Murunga said that the meeting emphasized the need to forge unity of purpose to ensure that the Luhya community has a candidate on the ballot in 2022.

“I don’t want to talk more on this because the matter is still with the elders,” said an MP who attended the meeting but declined to be named.

The wrangles have punctured NASA’s fortress as each of the four affiliate parties begin to cast their sights on the 2022 polls.

Raila, for instance, has convened the ODM National Executive Committee and Governing Council meetings this Friday. The two meetings are expected to replace officials and chart the future. Wiper will have similar meetings early next week.

Yesterday, the ANC held an NEC meeting after which Mudavadi appealed to hardliners from both Jubilee and NASA to tone down for the sake of the country.

The party also threatened disciplinary action against MPs who do not toe the party line. Last week, it linked outspoken Kakamega Senator Cleophas Malala and nominated MP Godfrey Osotsi to a plot to weaken the party and harm Mudavadi’s 2022 Presidential bid.

The two lawmakers denied the allegations and accused the party of targetting them for supporting and attending Raila’s swearing-in, which majority of ANC leaders snubbed.

Osotsi, the immediate former secretary general, and Malala skipped the meeting at the party’s headquarters in Lavington, Nairobi.

“We will henceforth take party discipline very seriously. We invite all our members to take keen note of this,” Mudavadi said.

“As a party that upholds peace founded upon justice, we want once again to reach out to all major players in the country and call upon them to drop their grandstanding and place Kenya and Kenyans first,” Mudavadi said.

“We now call for a return to the path of reason, especially among leaders in the country at all levels. The time has come that we must all reason together.”

President Uhuru Kenyatta has ruled out dialogue with the Opposition on electoral reforms and said he is focussed on Jubilee’s development agenda.

Mudavadi to Atwoli: Raila betrayed us Reviewed by samrack on February 21, 2018 .

Share thisFacebookTwitterPinterestEmailWhatsAppMudavadi to Atwoli: Raila betrayed us ANC Leader Musalia Mudavadi has claimed that Raila Odinga tricked his co-principals into missing his controversial swearing-in ceremony on January 30. His disclosure exposes the simmering unease within the NASA coalition, despite the show of normalcy as affiliate parties begin to switch their focus to the 2022 race.