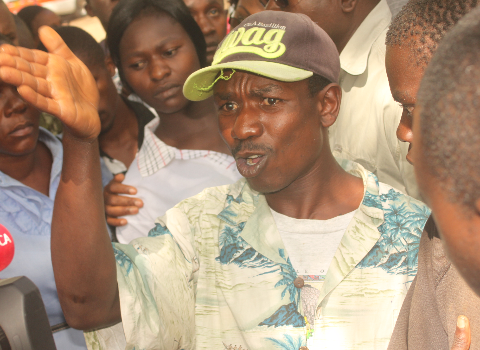 Kabete MP George Muchai will be buried on Friday this week, his family has said.

The funeral will be preceded by interdenominational prayers at St Joseph’s church in Kabete on Thursday.

St John Ambulance, that responded to a call of the attack, said the unknown assailants were in a Toyota Probox with sealed number plates.

The attackers intercepted the MP’s car before opening fire and killing all its occupants.

Investigators say CCTV cameras along Kenyatta Avenue did not capture the incident because it was beyond their field of vision.

They are reportedly examining footage from cameras at Kipande House, and are required to submit their findings before Muchai’s burial on Friday.

Mourners have been meeting at the home along Kangundo road amid preparations.

Various leaders have condemned the killings, some accusing the Jubilee government of failing to secure the country.

Separately, a street urchin who witnessed the fatal shooting of Kabete MP George Muchai and three aides, said the assailants considered killing him, but chose to let him live.

Patrick Juma (pictured above) recounted how after a lone shooter killed Muchai, his driver and two bodyguards, he collected their pistols and a suitcase with the help of another masked man.

“I was woken up by a huge bang of a metal bar hit  adjacent to where I was sleeping, I then noticed the driver of the car I could  identify as Probox with sealed  plates enquiring availability of a certain newspaper,” said Patrick Juma.

Juma said that after the attackers collected the gun and suitcase and were returning to the car, the driver of the vehicle spotted him and ordered the shooter to finish him off “to leave no eyewitnesses.”

“It was at this point that the Probox driver’s eyes met mine and he told the shooter to kill me in order to leave no eye witnesses,” Juma said.

According to Juma the shooter upon reaching him however decided to let him live.

“Huyu ni sufferer wa barabara, wachana na yeye” (This is a poor man, leave him alone) Juma reported his would be killer saying. The shooter got back into the vehicle and the gang drove off.

Juma then says after the assailants left he raised alarm, drawing the attention of guards who had initially hidden on hearing the gunshots.

The late MP is said to have been coming from Westlands and had been tailed by the attackers before they struck leaving him and all his aides dead.

President Uhuru Kenyatta led other top officials of government as well as from the opposition in condemning the attach and directed police to act quickly to apprehend Muchai’s killers.

“Investigations are already under-way and I expect the Police to mobilise all resources to ensure the criminals who murdered Hon. Muchai, his two bodyguards and driver are speedily apprehended and made to pay for their heinous act according to the law,” Uhuru said.

Kabete MP Muchai Burial on Friday, As Homeless Man Claims He Witnessed The Killing Reviewed by samrack on February 9, 2015 .

Share thisFacebookTwitterPinterestEmailWhatsApp Kabete MP George Muchai will be buried on Friday this week, his family has said. The funeral will be preceded by interdenominational prayers at St Joseph’s church in Kabete on Thursday. Muchai, his driver and two bodyguards were shot dead at the Kenyatta Avenue roundabout early Saturday morning. St John Ambulance, that responded